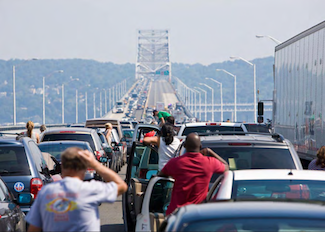 Last week the Federal Highway Administration released the Draft Environmental Impact Statement for the Tappan Zee Bridge reconstruction project.  This is big news because it finds, in the words of an Associated Press writer, “no ecology obstacles” to the plan.  However, lots of people who submitted statements in favor of transit on the bridge were frustrated because the project leaders refused to do more than build a car bridge that “will not preclude transit.

That is what we have said all along’€¦Our position has always been you cannot build transit until you replace the bridge. We don’t think it is financially feasible at this time for transit to be included, but we are building a bridge that will last for 100+ years, so at some point in the future, if the ridership numbers, and the fare box recovery ratio warrant the investment, we will make sure that it happens. So we are building the bridge to not preclude it in the future. And what that means is the footings will be spread appropriately and there will be enough weight-bearing capability on the bridge to hold transit in the future.

I’ve highlighted a key phrase that jumped out at me the second time I read it: if the ridership numbers and the fare box recovery ratio warrant the investment. You could read the part about “ridership numbers” as McDonald simply saying she’s not going to put the state in a position where it’s vulnerable to the Empty Lanes Attack. If they’re going to reserve a lane for buses, they want to be able to say that that lane moves enough people to justify keeping private cars out.

The bit about farebox recovery is more troubling. Currently, fares paid by Tappan Zee Express and Orange-Westchester Link riders cover about ten percent of the cost of running those buses. What McDonald is saying here is that it’s not “financially feasible” to spend that much money subsidizing bus rides as well as reserving the lanes for buses. Cannily, she doesn’t say what kind of farebox recovery ratio would warrant the investment, allowing herself and her successors to dismiss any request for transit.

The troubling part is that McDonald seems to have no clue that roads and transit compete with one another – or possibly to be deliberately ignoring this fact. If we add a lane to the Tappan Zee Bridge (and everyone knows it’s going to be at least three lanes), that makes it easier to drive, and lowers the demand for transit. In other words, as long as the government keeps widening the roads and bridges the farebox recovery ratio will never warrant the investment in transit.

McDonald has just flushed any credibility she had left on smart growth issues down the toilet, but what about her boss? Most of the posts about the bridge point the finger at Governor Andrew Cuomo, and clearly he’s the one pushing for the bridge to be started this year. It’s not hard to figure out why: he wants to have at least one inspiring infrastructure project finished by the time he runs for President in 2016. He doesn’t see transit (much less “BRT”) as necessary to this bullet point on his resume.

Transit advocates do not have the power to take away this bullet point that Cuomo so desperately seeks, and I can’t think of anything we could offer him that would have equal political value. Is there a transit project that would move 150,000 people a day for $5 billion dollars and be finished by 2016 without requiring Cuomo to share the glory with anyone else?

If we want to stop this project, appealing to Cuomo or McDonald will not help. There are a few other avenues, though. Since October, the lead agency on the bridge replacement project has not been the State Department of Transportation, but the FHWA. The FHWA is part of the United States Department of Transportation, headed by everyone’s favorite Republican ex-congressman from Peoria, Ray LaHood. LaHood has been actively courting the smart growth and alternative transportation crowd, and seems most passionate when he talks about bike facilities and high speed rail. Why not lobby him and his boss, President Obama? At the very least, every time LaHood shows up to speak at a pro-transit or pro-bike gathering, someone could say to him, “You know, Ray, this Tappan Zee Bridge project is a disaster, and your agency is leading it!” Not out loud, to embarrass him, but quietly, privately, so that he gets the message that people are paying attention and connecting it with him. (You can also mention the eerily similar Columbia River Crossing).

Another possible route of opposition is New York State’s traditional system of checks and balances, known informally as “three men in a room.” Streetsblog has mentioned that Senate Finance Committee Chair John DeFrancisco expressed frustration with the vagueness of the transportation budget. Assembly Speaker Sheldon Silver has killed boondoggles in the past; would he or Dean Skelos be willing to expend enough political capital to kill this bridge project?

Since both the pro-bridge coalition and the pro-BRT coalition have reserved domain names for their positions, I have set up a website showcasing all the reasons to tear down the bridge and not replace it. Please link and tweet it widely!

Cap’n Transit, who was born in New York and grew up in the Hudson Valley, West of the river, writes about mass transit in the NYC metro area at CapnTransit.Blogspot.com.  He feels that eliminating government incentives for people to drive, and to help transit compete fairly we can ‘€œreduce disease, injury and death; improve energy efficiency; bring communities back together; and make access to work, shopping and entertainment fairer.’€