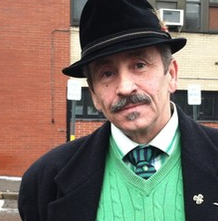 White Plains, Jan 17 — The man on a mission to send a message to Rockland County was in the news again, but this time in court on the other side of the river. Michael Davitt, the former Rock Co employee who dangled from the Tappan Zee while he tangled traffic for three hours last November, appeared in Greenburgh, NY Town Court on Tuesday to answer charges of  reckless endangerment, criminal trespass and resisting arrest.

He’s resigned to his punishment but is unrepentant about his cause. ‘€œI understand I must pay somewhat for what I did,’€ Davitt told the The Daily Dobbs Ferry. ‘€œI just want people to understand what drove me to do what I did.’€

On November 7, 2011, Davitt suspended himself from the Tappan Zee Bridge for three hours while displaying a sign critical of the Rockland County government. His banner read, ‘€œRockland Executive Legislature Coverup Retaliation.’€ Davitt had been a regular at Rockland County Legislature sessions to protest his 2008 firing as a substance abuse counselor.

His next court appearance is Feb 28, but Davitt hinted that we may hear from sooner unless Rockland County is willing to address his grievances. ‘€œI have to go viral with all this stuff,’€ Davitt said.