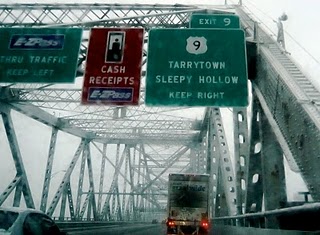 Yesterday, the Tri-State Transportation Campaign (TSTC) introduced BRTonTheBridge.org, a Website focused on getting NYS Governor Cuomo to change his mind about excluding mass transit from the new Tappan Zee Bridge. In December, the TSTC put out a press release announcing support from 11 Democratic and Republican regional politicians for Bus Rapid Transit (BRT). The pols echoed what the public has been saying all along:  84 percent of respondents to a Dec 22-28 poll said they wanted to see some form of mass transit on the new TZB.

NYS DOT Commissioner Joan McDonald told the Journal News that a new bridge would not include BRT because adding buses would delay construction by at least two years. Ross Pepe, president of the Construction Industry Council and the Building Contractors Association, announced the formation of ReplaceTheTZBridgeNow.org, a new coalition of business and labor groups which support the governor’s bus-less plan.

However, there are a couple of problems raised by build-it-now coalition. The first is that the Website address they provided doesn’t actually exist, yet. The domain name, ReplaceTheTZBridgeNow.org, was registered on Jan 10 — one day before the pro-labor/pro-Cuomo announcements. However, the site has yet to be created.

The second issue is McDonald’s contention that adding buses on the bridge would slow down construction. The previous Tappan Zee Bridge plan used a phased approach: first build the bridge, then add BRT followed by a new commuter train line from Suffern to Grand Central in the final phase. It’s not clear why a phased approach couldn’t be used for the revised plan. Politically, it would seem like the expedient thing to do.

The TSTC says that if it’s jobs that labor wants, then unions and employers should hop on the BRT bus. “Building a bridge with bus rapid transit will create more jobs now through construction,” they write on BRTonTheBridge.org. “It will provide a backbone for economic development in the region.”

The draft environmental impact study (DEIS) for the revised Tappan Zee Hudson River Crossing project is scheduled to be released on Jan 19. Public hearings are planned for February with a final DEIS scheduled in June.