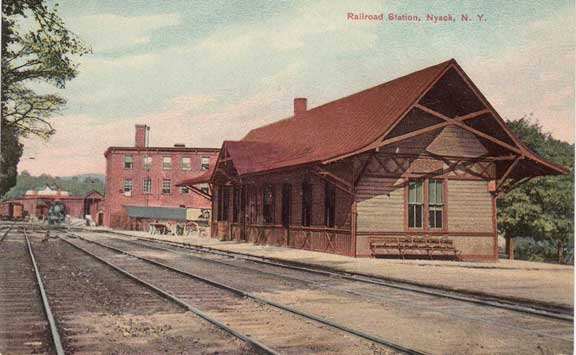 Postcard of the Nyack railroad station. "Located along Depot Place (today's Railroad Avenue) reaching to Cedar Hill Avenue. The railroad service to Nyack began in 1870 and at its peak, ran almost 20 trains daily, in both directions. The "Flyer" left Nyack around 8:00 a.m. each morning...and delivered its passengers to Wall Street in time for the 9:00 a.m. market opening." Regular commuter service ceased in 1965. Source: Historical Society of the Nyacks

Here’s a unique Back-To-The-Future idea about improving Rockland commuters’ weekday trip to NYC without building a new Tappan Zee Bridge. The Pedestrian Observations blog says electrifying several of the old rail lines that cross Rockland, Orange and Bergen counties can achieve some of the goals of building a new bridge while costing billions less than constructing TZB II.

If you haven’t been following the People vs The Governor standoff about mass transit on the Tappan Zee Bridge, here’s a quick recap of where we are today:

In Transit Alternatives to the Tappan Zee Widening, Alon Levy says there’s a way to make everyone happy. OK, maybe not everyone.

I propose a regional rail system instead, focusing on serving Rockland County and perhaps a few centers in Orange County. There are multiple lines crisscrossing Rockland County, with limited or no freight traffic, passing through old town centers that would make good regional rail stops and connecting to good alignments in North Jersey…The main difference with any Tappan Zee proposal is that the existing rail lines go north-south, whereas the Tappan Zee is east-west. Fortunately, most existing movement is north-south…The selling point of the regional rail alternative is that, despite job sprawl, Rockland County residents are still more likely to need to travel to Manhattan than to Westchester.

Levy, who describes himself as “pure mathematician with a side interest in urbanism and mass transit,” grew up in Tel Aviv and Singapore. He says Nyack, among other communities in Rockland County, are good candidates for Transit Oriented Development (TOD), a planning approach which encourages mixed use residential and commercial development within a half mile of mass transit to encourage walking instead of driving.

Although Rockland County is very sprawling, it has just enough old cities to anchor regional rail at the residential end. The effect is magnified if we can assume some TOD ‘€“ for example, developing over the many parking lots currently in place in Nyack near the legacy Erie station ‘€“ but as with commercial TOD, this is desirable but not very likely with the current political structure. Fortunately, American commuter rail works very well as a shuttle that extends auto-dependent commutes into cities that have no room for more cars; as a narrow alternative to constrained highways, it often succeeds, and would be a no-brainer compared to a bridge as expensive as the Tappan Zee.

The cost of reviving and electrifying the four lines proposed in my regional rail post (Erie Main, Pascack Valley, West Shore, and Northern Branch) is quite small compared to either the cost of bringing them to Manhattan or that of rebuilding the Tappan Zee Bridge. The cost of bringing the lines to Manhattan is substantial, but done right it would be much lower than the Tappan Zee Bridge’s $8.3 billion excluding any transit component.

Despite the fact the public and the governor agree that a new bridge is needed, Levy thinks this approach would appeal to Rockland-to-New York commuters. “One does not drive into New York out of love of driving; one drives into New York out of necessity,” says Levy. “Making this less necessary could reduce some of the political will to spend billions more than required on widening a bridge.”

Levy might be right about commuting into NYC for work. But he’s sidestepping a few some issues:

Despite these objections, Transit Alternatives to the Tappan Zee Widening is a good read and food for thought about the Lower Hudson Valley’s commuting future.