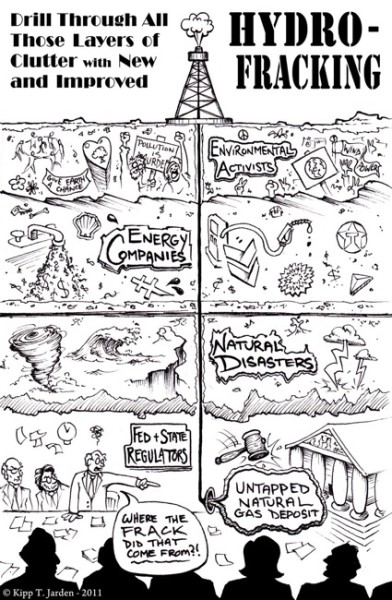 TODAY is the LAST DAY to submit public comments to the NYS Department of Environmental Conservation (NYSDEC) on the the Revised Draft SGEIS on hydrofracking. It is imperative to demonstrate to the NYSDEC and Governor Cuomo the strength of the opposition to hydrofracking by New Yorkers.

Please do everything you can to make your voice heard louder than ever and to Governor Cuomo and the NYSDEC by visiting www.amillionfrackingletters.com and taking one minute to use the automated letter writer which will put together a letter for you that will be hand delivered to the Governor’s office in Albany and if you wish, a copy will also be delivered to the NYSDEC for the public comment period which ends this Wed, January 11, 2012.

If you would like a reminder about what’s wrong with hydrofracking and why residents you should be concerned, here are a few reasons why.

Horizontal, slick-water hydraulic fracturing, also know as “hydrofracking” or “fracking, is a relatively new technology developed to extract natural gas trapped in bedrock below the surface.  The technique involves injecting millions of gallons of water mixed with thousands of gallons of highly toxic chemicals and sand which is then forced under high pressure down and across into horizontally drilled wells, thousands of feet below the surface and then sucking the toxic wastewater (or flowback fluid) back to the surface along with the gas and other contaminants, including radioactive materials.

According to the Chesapeake Energy Company, the possible complications resulting from fracking include “well blow-outs, craterings, explosions, pipe failures, fires and uncontrollable flows of natural gas or well fluids.”

This inherently dangerous and destructive form of energy exploration is an environmental and public health disaster.  It will pollute our air, threaten our drinking water, contaminate our soil, our food, negatively impact tourism, agriculture, and other local businesses, and raise our taxes.

Here are the top reasons why we should oppose hydrofracking in New York: