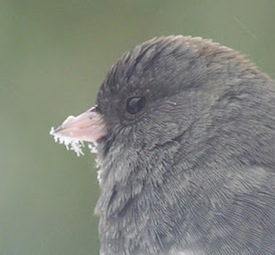 Once the snow hits, and the ground is inaccessible, the action at bird feeders really picks up. That means the best time of year for bird watching has begun!

The Audubon Society’s Great Backyard Bird Count was set up to help track wild bird populations. It helps scientists figure out which species are surging in numbers and which might be declining. They can also track their patterns of migration and determine the effects of urbanization, climate change and disease. Last year 594 species were represented, 92,000 lists were submitted, and over 11.4 million birds were counted! On their website, you can see lists of the most populous birds in the country, or break it down locally. Last year, these were the most common birds in the Nyack area:

Maybe you’re wondering how Nyack compares to the rest of the Northeast? Here are the most populous birds last year in the Mid-Atlantic, East Central, Northeast, Great Lakes, Allegheny and Atlantic Canada regions, according to the Cornell Lab of Ornithology:

By conducting our own hyper-local bird count, we can see what the most common birds are in our own backyards and compare our results with our neighbor’s. Do you have more Blue Jays than Juncos? More Chickadees or more Woodpeckers? I did an informal count of the birds at my feeder and made a list of the most popular birds. It ended up being much different from their’s:

I’ve only had a few transient European Starlings visit, though it’s the top bird nationally. I rarely see Northern Cardinals and can count on one hand the number of times I’ve seen an American Goldfinch.

Go to the Great Backyard Bird Count site and sign up for this year’s count, running February 17 ‘€“ 22.