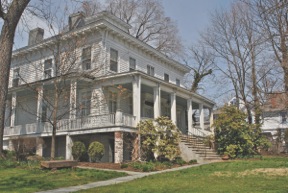 Nyack’s historical society wrote to Tappan Zee Bridge Project Director Michael P. Anderson to express concerns about the possible impact a new bridge may have on properties of historical significance in the Lower Hudson Valley.

As President of the Historical Society of the Nyacks, a Consulting Party in the Section 106 review, I am writing to point out that the Area of Potential Effect for Indirect Effects associated with the replacement of the Tappan Zee Bridge, as shown in the October 14, 2011 documentation package, is far too small to include all the areas that meet the stated criteria: ‘€œareas from which the existing Tappan Zee Bridge and Hudson River are clearly or partially visible, and where the replacement bridge, proposed north of the existing bridge, has the potential to cause indirect alterations in the character or setting of historic properties in these areas.’€

The Tappan Zee Bridge and the Hudson River are clearly or partially visible from many locations throughout the Villages of Piermont, Grand View-on-Hudson, South Nyack, Nyack and Upper Nyack; and from unincorporated portions of Orangetown and Clarkstown on the hillsides up to and including the ridge of the Palisades Hills. The increased roar of traffic, the noise of construction, and the in- creased air pollution will impact the character and setting of all properties in this larger area as will the change in the visual environment.    The effects will extend northward to and including Hook Mountain, a National Natural Landmark that is part of the Palisades Interstate Park, and south to Tallman Mountain, another part of the park.

There are many properties within this larger area that are listed on the National and New York State Registers of Historic Places and many others that are clearly eligible. The effects of the bridge replacement on all of these properties should be included in the review process. The idea that the replacement of the Tappan Zee Bridge will affect only those properties immediately situated on the waterfront is terribly inadequate.
Please advise us what will be done to correct this omission.

Winston C. Perry Jr. is President of the Historical Society of the Nyacks