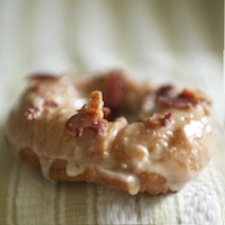 Three Nyack familes who have been friends for decades are starting a new business from scratch, making donuts from scratch. Here’s a progress report on Gypsy Donut And Espresso Bar, scheduled to open in late March on N. Franklin Street in downtown Nyack.

As the second week of Gypsy Donut’s operation drew to a close we find ourselves up to our elbows in work, both literally and figuratively. Having finally gotten power and gas on into our space we started the task of cleaning and it’s a daunting task, partially because of what general contractors like to call ‘€œSite Conditions.’€

With electricity we were able to fire up our HVAC and Keith from Berry Burners ran over on to our space on his way home from another job to check out the system and fire it up. (When you turn gas back onto a system the line has to be purged before it will light’€”something I’m not keen on doing.) Keith was actually very familiar with the system as he was consulted about it years ago and it was already on its last legs back then. Now it’s sort of on a few toes. That’s something we’ll deal with shortly.

Our water heater is another story, there’s actually no water line leading into it. It was capped when our neighbor’s space was renovated after Gracie’s closed. That’s something we’re going to have to deal with immediately.

That was the sideways step, everything else was a gigantic leap forward for us. Thanks to some editorial pushes from Patch and Nyack News and Views we hit our $10,000 Kickstarter goal. That doesn’t mean that it’s time to stop helping us out with funding, every single dollar we get helps us open sooner . We’ve actually got a lot higher price tag than the $10,000 Kickstarter goal to open our doors, but that was an amount we were comfortable seeking via Kickstarter. The more we raise, the less we have to seek outside funding to complete this project. As of this Jan 21, we’re already at $12,125 and we’re just thrilled with the support of the community. We’ve all been stopped on the street by friends and family and given encouragement (and donut suggestions).

With a sign-off from architect Kier Levesque (who came out and checked out a partition wall, again after hours and on his own time) we were able to take down the partition wall and get to cleaning.

Wow, cleaning. We decided to remove the (ugly) paint and reveal the beautiful original brick wall underneath it and we’re using a totally VOC (Volatile Organic Chemical) free, environmentally friendly stripper. No dangerous chemicals at all.

To apply this stripper we rented a sprayer, though the paste-thick stripper was too much for the machine. We solved this by thinning it with water (since it’s water based) and assigning someone to constantly stir the container. Oy.

After that we laid paper over the stripper and let it set. When we returned to remove the paper it came off of the brick fine, but it turned out that the previous painters had spackled the brick. Double Oy. We’ve probably put about 60 man hours into slowly removing the flecks of paper by hand. (But at least there’s no harmful chemicals in all of this!)

We also stopped by the building department a few times, got on the schedule for the Architectural Review Board for our window sign, and took a trip over to the Department of Health. There are a lot of papers to file as a small business owner, but at least so far everyone we run into has been great. The DOH folks have given us tremendous help (they looked over our plans, approved them and told us what we needed to do next) without the usual runaround most people expect from a bureaucracy.

On the food front (this is a food business after all) we’ve been testing some of our recipes and we’re really liking them. A few of our favorites have been cake donuts with a hibiscus icing (bright pink without any artificial colors), a (homemade) marshmallow icing with drizzled dark chocolate and a cardamom spiced donut with Kefir lime glaze.

And by (very) popular request we did a maple iced donut with crumbled bacon. As one of our site commenters said ‘€œthat shouldn’t be legal.’€ It’s really, really good.

This week we’re doing more cleaning, getting our hood cleaned and inspected, getting our floors and backsplash cleaned.

Thanks again to everyone who has supported us.

David Schloss is a lifelong foodie with expertise in new businesses start-ups, social marketing and e-commerce. He is one of the  partners at Gypsy Donut and Espresso Bar.