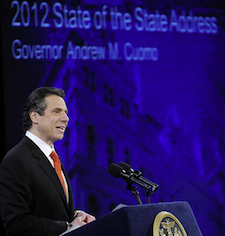 2011 was a historic year for government in New York. Although it’s still not unusual to see the word “dysfunctional government” next to “Albany,” the leaders of the state senate and assembly praised the governor before the governor’s address. Cuomo kicked off his address by ticking off some of New York’s 2011 accomplishments including closing a $10 billion deficit, implementing a two percent tax cap, middle class tax reform, eliminating the MTA payroll tax for most small businesses, ethics reform and passing a Gay Marriage bill in New York State.

“In New York, we may have big problems, but we confront them with big solutions,” said Cuomo. His address proposed multiple new initiatives to spur economic growth in the state.

Hoping to quadruple annual solar power development by 2013, Cuomo announced “NY-Sun,” a new program to attract large, commercial-sized solar projects to the state.  The governor will expand solar power rebate programs for residential and commercial small-to-medium systems and incentivize consumers to retrofit their homes with energy efficient upgrades beginning in January 2012. He’s also going to do the same for state facilities by accelerating energy-saving improvements in NYS buildings. Cuomo says the plan will save millions, create thousands of high skilled jobs and reduce greenhouse gas emissions by 8.1 million metric tons.

The governor ended his speech saying that what his administration accomplished in 2011 demonstrates what can be done if the executive and legislative branches work together.

“By all accounts, last year was a tremendous success. There are many reasons why, including one simple one: We changed our attitude. We had a constructive impatience for government dysfunction and a disregard for the political extremists on the left and the right, we believed in the people, and we had a mutual respect, both institutional and personal.

“By the end of the year, we were not first Democrats and Republicans, we were first New Yorkers and we acted that way. We put the politics aside and put the people first. And it worked. And we worked. We delivered for the people ‘€” and we made this state a better state and I was honored to be a part of it with you.

“Today, I am telling you this: we are going to reach even higher.”