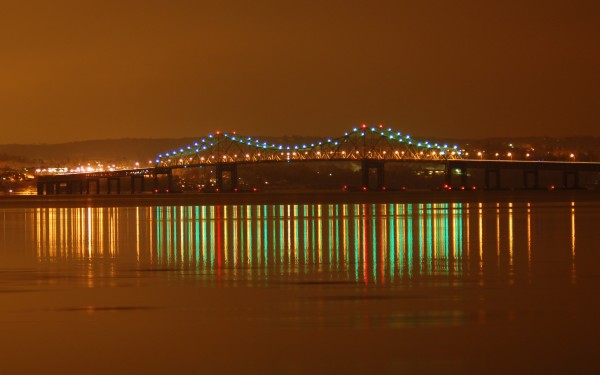 Nyack, Dec 16 — Pity the poor Tappan Zee Bridge. How would you feel if you turned 56 and people said you were old, run down and needed to be replaced?

On December 15, 1955, the TZB opened to regular traffic for the first time. On December 15, 2011, an unlikely coalition of 11 Democratic and Republican politicians joined by 16 other pro-union, pro-environment, pro-business groups announced their opposition to Governor Andrew Cuomo’s plan to build a new Tappan Zee Bridge without mass transit.

It sounds like a script for a David vs. Goliath political reality show. But in this rewrite of the Bible story, the side with the numerical superiority is at a distinct disadvantage: their team isn’t lead by a governor backed by a president.

On Thursday, the non-profit Tri-State Transportation Campaign (TSTC) called for a revised plan to build a new Tappan Zee Bridge with mass transit, specifically Bus Rapid Transit (BRT). The press release included the names of politicians from both sides of the aisle and both sides of the river: two New York state senators (Carlucci, Stewart-Cousins) , three NYS assemblymen (Abinanti, Paulin , Zebrowski), the Westchester and Rockland county executives, three mayors (Tarrytown, Nyack , Elmsford)  and the Greenburgh town supervisor. The diverse group was formed to protest Governor Cuomo’s decision on October 11 to throw out the results of a comprehensive nine year study of regional transportation needs which included both bus and rail transit as part of a new Tappan Zee Bridge.

The group agreed with the governor’s decision to replace the Tappan Zee, but said that that a bridge built without public transportation would gridlock the Hudson Valley’s economy and do nothing to prevent future traffic congestion and air pollution.

‘€œGovernor Cuomo must listen to the desires of Hudson Valley residents and put transit back in the Tappan Zee Bridge project,’€ said Kate Slevin, executive director of the Tri-State Transportation Campaign. ‘€œIn particular, bus rapid transit can serve as a focal point for transit-oriented development in the Hudson Valley and prevent sprawl.’€

Although the state says a transit-less TZB doesn’t preclude future transportation alternatives, many doubt that will ever happen. “The alternatives described have gone too far in deferring any construction within the crossing that would lay a foundation for a future public transit within the corridor,”  said Rockland County Legislature Chairwoman Harriet Cornell. “The public transit alternatives were virtually eliminated in the scoping process.”

Despite the political heat and broad public support for re-adding mass transit to the project, the governor has been unwavering in his “bridge now, transit some day” position. ‘€œIf the county executives are each willing to write the state a check for $1 billion for construction and over $100 million for operating costs, we will move forward with BRT,’€ said Cuomo spokesman Matt Wing in an interview with the Journal News.

Assemblywoman Ellen Jaffee (Suffern – D) is the only Hudson Valley politician to back Cuomo’s bridge plan unconditionally. “After years of planning and deliberation, I am not prepared to delay construction on a replacement bridge by demanding the perfect at the expense of the possible,” said Jaffee.  “I will continue to advocate for BRT as planning and construction proceed, in addition to always being able to add BRT after the project is completed.”

There’s no evidence that the governor hates mass transit, per se. His objections probably have more to do with finance than feasibility. Cuomo has frequently mentioned creating a public-private partnership as a way to pay for a new Tappan Zee Bridge. That bridge approach would require outside investors, who are unlikely to invest in a project requiring billions of capital for a mass transit scheme with zero return on investment.

Here’s a list of the elected officials, community, environmental and union groups included in the TSTC’s Transit-less Tappan Zee Bridge Would be Obsolete from Day One statement.