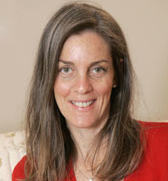 Looking like Mr. Sad Sack, my husband Ricky took off his black-and-red checked lumber-jacket, sunk into the couch and emitted a long, painful whistle, like a tea kettle.

‘€œDo you ever wish we could just pack it all in and go live in a condo somewhere?’€ he asked.

I put down the newspaper, surveyed his strained face and said: ‘€œAre you serious?’€

It’s been six years since we’ve taken on an old rural house and everything that comes with it, including vegetable gardens and a chicken coop. It’s a life of perpetual tending. There’s always much to do, but this is our slice of paradise.

We were having company over to celebrate the weekend we moved in, our house anniversary. I kept checking weather.com, crossing my fingers. By Friday, everyone was dropping the ‘€œs’€ word.

Saturday morning, snowflakes started falling. By the time our friends arrived, our house and the woods around it resembled a shaken snow globe. Ricky glanced out the window and excused himself. He came back 20 minutes later, soaked with snow. ‘€œThe roof on the chicken coop collapsed. I put up something temporary to ride out the storm.’€

I was racing against the clock. The lights had been flickering for the past hour. Weather forecasters warned of leaf-laden trees snapping and falling. Power outages were a certainty. My roasted potatoes and garlic shrimp were being cooked on borrowed time.

We all sat down for our meal in the cozy dining room, candles aglow. Outside, we heard one commotion after another. Cars could not climb our slippery, unplowed road. People were abandoning vehicles, walking in a zombie-like daze. An ambulance backed down the hill, sirens wailing. Finally, a plow pulling a flatbed truck came to a dead stop in front of our house.

I urged my guests to come back to the table, away from the window. As I served dessert and espresso, the power blew.

Our guests were eager to flee ‘€” except it took an hour to dig them out of our unplowed driveway.

The house quickly turned cold. The light was gone at 6 p.m. We gathered flashlights. Ricky brought in a stack of logs for the fireplace. I was concerned about the flatbed and plow, sitting in front of our house, abandoned. There were no streetlights. Cars would not see parked vehicles on our darkened road, and would crash into them. I called the police, over and over on my cell.

At 7 p.m., a couple of guys came to collect the plow, but not the flatbed. They were gunning the engine, trying to rock the plow out of a rut.

‘€œThey’re going to knock down our fence and kill [our chicken] Miracle!’€ I cried.

Ricky ran outside and up our driveway screaming ‘€œSTOP’€ with his hands flailing in the air. It was too late for the fence. Fortunately, he stopped them in time to save our chicken.

The next day, I woke to a cold house and dishwasher filled with unwashed dishes. I kept warm by boiling pots of water and scrubbing our dirty dishes. It was warmer outside than inside, so my daughter went out to make a snowman with the foot of snow that fell.

Then we went to Starbucks for two hours to charge our cellphones and check e-mail.

I was feeling dejected. The recorded message at Orange & Rockland prepared people to be in the dark, without heat or hot water, for up to a week.

‘€œMaybe you’re right,’€ I said to Ricky, as I cooked pasta on the gas stove while he suspended a flashlight overhead. ‘€œMaybe we should go live in an apartment again.’€

We ate dinner in front of the fireplace. My daughter went to bed. Ricky and I were listening to the radio, strategizing about where we’d take showers.

Just as we got up from the couch, the house lit up like a Christmas tree. We rose from the couch and danced and hugged. ‘€œHappy house anniversary!’€ I said. ‘€œLet’s celebrate,’€ Ricky said, with a wink.