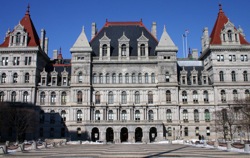 Albany, Dec 7 — Depending on how you see things, the proposed replacement for New York State’s millionaire’s tax is a huge victory for income distribution and fairness, a giant flip-flop by the governor, or a chance for the really rich to get away without paying their fair share. But if you speak fluent Alban-yse, you’ll probably see it as a deal with something in it for everyone.

Here’s the short and simple version: the so-called “millionaires tax” will expire this year, replaced by a new scheme that increases the burden on people who make more than $2 million a year. The 4.4 million taxpayers who make between $40,000 and $300,000 a year will take home a little bit more of what they earned, as their tax rate will be a little bit lower.

And now for a few of the convoluting details:

Although New York’s super rich will get a greater tax spanking than the rest of us, there’s still one thing for which they can be grateful: they don’t live in California. The Golden State’s Governor Jerry Brown has proposed raising the tax rate for people who make $250,000 a year or more to 10.3 percent.