Nyack, Dec 4 — The “As Others See Us” series looks at stories about Nyack as others see us from articles and stories in blogs and news media. Here are two recent posts which give us two views of how Nyack’s Edward Hopper viewed the world. One is from a fellow artist, the other provided by a learning lab for students trying to learn English — via old Voice of America recordings.

“Had a mini-revelation yesterday. On a totally intuitive level I now ‘get’ Edward Hopper,” writes Baltimore-based landscape painter Philip Koch. “It happened as I was looking out the bedroom window where Hopper slept for his first 18 years. Hopper fell in love with that view and never recovered. It really is that simple.” Koch blogged about his visit to the Hopper house earlier this month and how it affected him. Koch visited Hopper’s boyhood bedroom on the second floor, which has a view of North Broadway and the Hudson River. 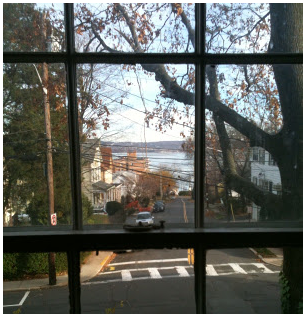 That view really got me, especially the light dancing across scene. I too grew up in a house with a water view, in my case Lake Ontario just East of Rochester, NY. Living up to it’s name as one of the Great Lakes, Ontario was vividly wide open and very wild much of the time. In contrast to Hopper’s view of Nyack, a busy boat building town in his time, my view of the water was framed by steep hillsides, heavily covered with a mature beech tree forest. I think Hopper’s life long attraction to sunlight shining on architecture and on water stems from just his experience of this view. That I looked daily instead at an all natural view of Lake Ontario is the biggest single reason I’ve focused my own painting on images of wilderness.

The second view of Hopper is both random and informative. What would you tell someone who lives far away and doesn’t speak English as their native language, what they should know about Edward Hopper?

Today we tell about artist Edward Hopper. He painted normal objects and people in interesting and mysterious ways.

“Edward Hopper’s Mysterious World” is an archived recording from the Voice of America — from another place and time about the life and career of Edward Hopper, read by by two VOA announcers who articulate every syllable ever so clearly and S-L-O-W-L-Y. It’s art and history combined into one package. But not in the way we usually think about it.

You’ll find the post on The Mission Language Lab, a “website is dedicated to all levels of English as a Second Language…where you can learn grammar, conversation, reading, listening, and more.”