tzxBus.com has been updated to reflect recent changes made to Metro North service. The site provides an easy-to-read schedule for commuters who use the Tappan Zee Express Bus to connect to the Metro North station in Tarrytown.

There are four routes affected by this update: 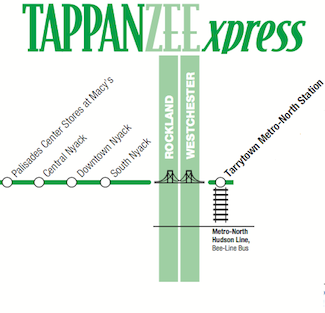 Nyack’s downtown bus stop has been relocated to the Artopee Way bus shelter adjacent to the Riverspace theatre. “This provides an Eastbound TZx stop in response to input from Nyack passengers who wanted a well-lit location with a bus shelter as another alternative to the sidewalk at Depew & So. Franklin,” says Michael Prendergast, Transit Marketing Coordinator for the Rockland County Department of Transportation.

The Tappan Zee Express provides service from Suffern’s NJ Transit train station in the West to points East of the Hudson including White Plains (downtown and Metro North train station). tzxBus.com is a snapshot of this route, focusing on routes most likely to be used by Rockland County Metro North commuters. For a complete Tappan Zee Express schedule, visit the Rockland County Dept of Transportation.