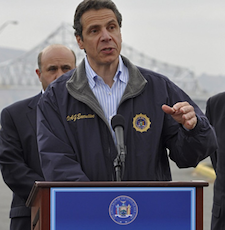 Ever since Governor Cuomo announced a hurry-up offense to break ground on a new Tappan Zee Bridge by next Fall, transportation planners, politicians and the public have asked: what happened to the Commuter Rapid Transit (CRT) trains and the Bus Rapid Transit (BRT)? The original project — priced at $16B but projected to cost as much as $20B — included mass transit and 287 road improvements, including a big fix for the 360 degree on-off-ramp at Interchange 10 in South Nyack. But the scaled back project Cuomo and the Federal Highway Administration hope to fast track is all about the bridge — and nothing more.

If you are going to go begging the Feds for big bucks, what’s a few billion more between friends?  Especially when you have nine years of study and the public’s confidence after 200+ meetings? After all, it would make the public happy and provide more work for construction sector employees.

Here’s one possible answer: the $16B project had more than half of its cost assigned to mass transit, the part of the plan guaranteed to lose money.

One of the widely discussed approaches to financing a new TZB is a “public/private partnership.” A story last week suggested that Cuomo was thinking of using public-employee and trade-union pension funds to finance infrastructure like the TZB rebuild. On Tuesday the Governor said that his remarks on the subject were misinterpreted and that he wasn’t planning to use the state’s pension fund. But that doesn’t rule out private investment as a source of capital.

What does this have to do with mass transit? Investors, willing to put a cool $1-2 billion into an infrastructure project, want a guaranteed return on investment. You can be pretty sure that the new bridge will generate revenue from tolls — all you have to do is count the 150,000 cars that cross it every day and then multiply it by the current toll…and remembering that a new toll might run as high as $15. For investors, a bridge with mass transit baked in must have been a non-starter: “You want me to invest $9 billion in a project that is guaranteed to lose more than it takes in?”

We know that the Governor is a big proponent of building a new bridge because of all of the construction jobs it will create. But, apparently, he’s not as enamored with the idea of putting mass transit on the bridge when it gets built. Although, in retrospect, the clues were always there.

When then Governor-Elect Cuomo held a press conference in Tarrytown in November 2010 using the Tappan Zee Bridge as the backdrop, he never mentioned mass transit. However, he has — on several occasions — talked about creative financing. This includes everything from public/private partnerships to bake sales.

Although bake sales are unlikely to make much of a dent, the prospect of generating millions in toll revenue is sure to pique some Wall Street investors’ interest.