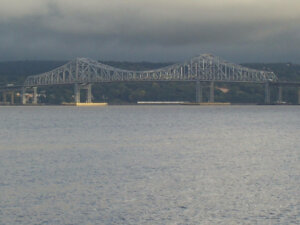 Streetblog says that New York can’t afford to build a new Tappan Zee Bridge without mass transit. And they have the math to prove it.

“According to the State of New York, spending $5.2 billion on a new Tappan Zee Bridge is affordable, but spending another $1 billion for a 30-mile bus rapid transit corridor is a bridge too far,” writes Noah Kazis in StreetsBlog.org. For a $1 Billion BRT investment:

StreetsBlog notes that these are conservative estimates because they are based on 2009 calculations which assumed I-287 corridor road improvements would will no longer be included in the project.

How would BRT help the average NYC commuter’s wallet? Assuming $4/gallon gas, Streetsblog says BRT  would save around $200,000 in gas costs every weekday. That doesn’t include any possible CRT benefits from building a rail line from Suffren to Grand Central.

“Not even counting weekend travel, these savings add up to about $100 million over the course of a year,” writes Kazis. “By building the Tappan Zee without transit, the Cuomo administration is forcing New Yorkers to absorb those costs,” he says.