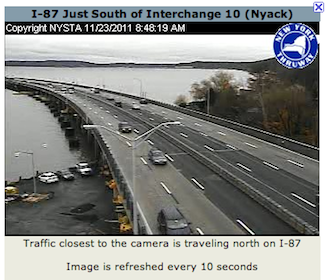 The Tappan Zee Bridge has a special relationship with the NYS Thruway. Although we don’t think of it as being part of the Thruway system, its strategic position — less than a half a mile north of where the Port Authority would be able to claim it for its own — helped provide the collateral for bonding the building of the road which runs North to Albany and then West to Buffalo.

And if you are traveling this weekend, you’ll have plenty of time to think about that sitting in traffic crossing the TZB. The Thruway authority calls out our Hudson crossing in it’s holiday traffic alert, “Turkey Time On The Thruway.”

The busiest section of the Thruway will most likely be the Tappan Zee Bridge Corridor (Rockland and Westchester counties), particularly northbound at the beginning of the holiday weekend, and southbound at the close of the weekend. “Black Friday” shopping will make the Woodbury area especially busy on Friday.

Thruway officials predict that from 12n to 8p on Wednesday (11/23) and Sunday (11/27) will be the busiest travel days of the year on the NYS Thruway system.  Last year, 3.1 million vehicles traveled more than 111.4 million miles on the Thruway over the Thanksgiving holiday period.

If taking a kayak from Nyack to Westchester isn’t your idea of fun…well there isn’t much else you can do. But you can get a good idea of what’s in store for you by checking the video cameras on the bridge and the approach to the TZB. Visit thruway.ny.gov/webcams  to get a glimpse of your congested holiday travel future.