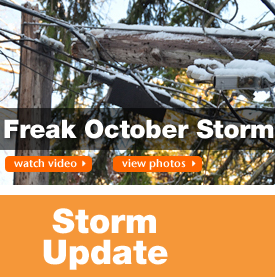 Rockland County, Nov 4 — As of 6a, Orange & Rockland says that the count of customers without electrical service from last Saturday’s pre-Halloween snowstorm is down to 4,000. As recently as  Wednesday, 19,000 customers still were without power. O&R says that service has been restored to about  95% of homes impacted by the storm, about 126,000 customers.

Yesterday, elected leaders from Rockland County toured a New City neighborhood which had been without electricity since last Saturday and called for a public forum with O&R and the Public Service Commission.

“There is an apparent lack of preparedness in vegetation maintenance to keep power lines clear, in the deployment of crews in the aftermath of a storm as well as in their ability to effectively communicate with customers. Clearly there are grounds for improvement because the current emergency preparedness plans are not working,’€ said NYS Senator David Carlucci.

“In just one instance of many, 65 residents of a senior community I represent have been powerless since Saturday, ” said NYS Assemblywoman Ellen Jaffee. “Our residents cannot afford, and most cannot endure another outage this severe, and we must do everything in our power to prevent it from ever happening again.”

‘€œThe public deserves a comprehensive review of all aspects of the preparation and response to this storm,” said Assemblyman Kenneth Zebrowski. “It is obvious that major improvements in communication need to take place, however, it is also imperative that we review the mobilization of work crews to ascertain where improvements should have been made and can be made for the future.’€œ

“Our residents deserve better, and the New York State Public Service Commission needs to hold O&R accountable and insure that the public is protected and receives the service they deserve and, in fact, pay for,’€ Clarkstown  Supervisor Alex Gromack.

In addition to the 4,000 Rockland County customers offline, O&R says that 3,100 in Bergen County and 220 in Orange County are still waiting to have their service restored.