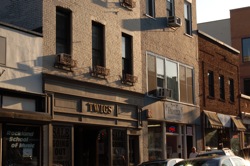 Nyack, Nov 16 — Given the low opinion Americans have of their elected leaders in Albany and Washington, you wouldn’t think there’s anything Main Street could learn from State Street. But a surprising thing happened last week in local politics: candidate advertising in the Nyack River Villages worked at a rate far above ad industry norms, offering a unique case study as to how local businesses can use the Web to advertise locally.

NyackNewsAndViews ran advertising from seven candidates competing  in village, town and county races during the two weeks prior to last week’s General Election. Typically, the click-through rate — the percent of ads that Web site visitors click to find more information — is less than .5 percent. Click-throughs aren’t usually that important because the goal of most advertising is create awareness and positively “brand” an advertiser to make sure that product or service is top of mind when consumer is ready to buy.

Although you can dispute whether candidates are a product or a service, they are most certainly a brand. It’s a fair comparison with surprising results: during the two weeks of advertising just prior to the Nov 8 election, five out of seven candidates advertising on NyackNewsAndViews received an average click rate ten times the advertising industry standard. During the first three days of the campaign, one candidate received an off-the-chart click-through high mark of 15 percent — 30 times higher than the .5 industry norm. Although results varied by candidates, every ad scored above the industry average. The highest click rates were recorded during the first three days of a campaign (when the ad was new and curiosity was high) and the two days prior to the General Election — right before voters went to the polls.

What do these results have to do with local business? There’s a perception — or maybe a fear of the unknown — that Internet advertising doesn’t work because it’s too easy for a display ad to be ignored. “If my competitors aren’t using the Internet, than it probably doesn’t work,” reasons many local advertisers. But the fact that consumers noticed these ads — and were interested enough to click on them at measurable rates — challenges that belief. It’s also significant that high percentages of Web site visitors clicked-in instead of tuned-out during a time late in the campaign when voters were being bombarded by campaign ads via direct mail, robo-calls and television.

Here are a few reasons why these ads worked — and why some of them didn’t.

This analysis included 14,900 ad impressions and almost 600 clicks on NyackNewsAndViews.com for seven candidates for public office delivered over a 15 day period prior to Nov 8, 2011.

There was no correlation between the candidates that were most clicked and the ones who were elected. A click doesn’t translate into a vote. Sometimes learning more about the candidate — or a product or service — will confirm your decision not to vote or not to buy. Good advertising can increase awareness and enhance a brand. In business, successful marketers use advertising in conjunction with price, promotion and quality products to move merchandise. The best ad campaign for a bad politician can’t guarantee an election victory any more than a great ad campaign will boost sales for a local business with high prices and lousy service.

What does this mean to Web-wary local businesses? For one bright shining moment, there’s solid research that shows that the Web works as an advertising medium to reach local consumers. Although the combination of good creative ads and consistent advertising is unlikely to produce any click through rates nearly this high, it does prove that local Web ads do get noticed. Creative ads placed next to compelling local content can be a boon to anyone trying to grow their business — or run for office — in the Nyack River Villages.