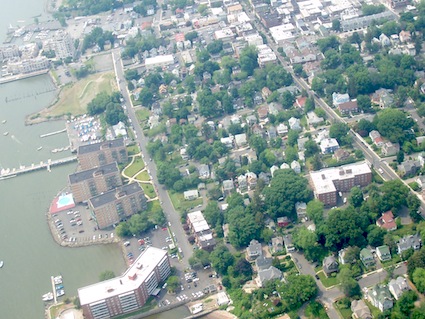 Nyack, October 19 — Piermont and Grandview will join the three Nyack River Villages in a grant proposal to study shared services in the Hudson River communities. The $50,000 NYS grant will pay for a study of areas where combining or sharing services can save costs.

“Only by working together we can survive the crazy economy with which we are all struggling,” says Nyack Deputy Mayor Jen White, who has been working with the Mayors of South Nyack, Upper Nyack, Grandview and Piermont to pass resolutions similar to the statue approved by the Nyack Village Board in August. “Thank you, so much, to the Mayors and Boards in our neighboring villages,” she says.

The participation of all five villages increases the chances the study request will get a green light from the NYS Local Government Efficiency Grant Program. “The more communities that are on board, the more likely it is that the grant will be approved,” White said.

On August 29, Nyack’s Trustees voted unanimously to approve the resolution to apply for the grant to study shared services. “Regardless of the results, we should at least support the study,” said Nyack Mayor Richard Kavesh.

A majority of Nyack River Village residents say they are open to the idea of greater consolidation, too. Almost two thirds of Nyack, South Nyack and Upper Nyack residents surveyed in September said if taxes remained the same and village services increased or stayed the same, they would be in favor of consolidating the separate Nyack River Village governments into one unit. Almost eight out of ten residents living in the county for 20 years or less said “yes” to consolidation. Among respondents with 20+ years in the county, 69 percent were open to consolidation with 31 percent saying “No, I am opposed to local government consolidation.” The survey, conducted by NyackNewsAndViews from September 12-13 2011, was open to all Nyack, South Nyack and Upper Nyack residents.

WHEREAS, the Village of Nyack is interested in conducting a Functional Consolidation and Shared Services Study to evaluate potential cost savings associated with the consolidation and/or shared municipal services;

WHEREAS, the New York State Department of State, through its Local Government Efficiency Grant Program, has announced the availability of up to $50,000 to municipalities to fund functional consolidation and shared services studies; and

WHEREAS, the Village of Nyack will be entering into an inter-municipal agreement with various municipalities (see Resolutions attached), to complete a Functional Consolidation and Shared Services Study to assess the cost savings, which may result from consolidating and sharing municipal services; and

WHEREAS, by taking an inter-municipal approach to service delivery, our municipalities can both save money and provide more effective services.

NOW THEREFORE BE IT RESOLVED, James C. Politi, as Village Administrator, is hereby authorized and directed to file an application for funds from the New York State Department of State’s Local Government Efficiency Grant Program, in an amount not to exceed $50,000, and upon approval of said request to enter into and execute a project agreement with the New York Department of State for such financial assistance to this Village of Nyack for the purpose of completing a cost of services study to assess the cost savings, which may result from consolidating and sharing municipal services with the various municipalities, as above.

FUTHER BE IT RESOLVED, the Village of Nyack will commit its share of the 10% required local match to participate in the Local Government Efficiency Grant Program.