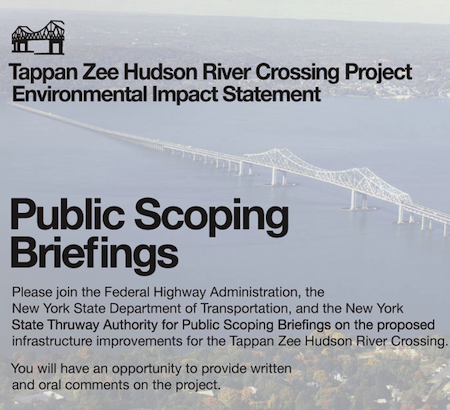 Rockland and Westchester mass transit advocates might be feeling a bit like twin sisters who had been courted for nine years with promises of a better tomorrow, only to arrive at the altar and find they will be moving into the same too-small studio apartment where their parents lived in 1955.

On Monday NYS learned that a replacement Tappan Zee Bridge will get fast track approval by the Federal Highway Administration at a greatly reduced cost and likely without mass transit improvements.

Locals agree. “We need trains and access to crossing the span without [cars],” wrote one Nyack Facebook user. “I truly feel no hope.”

The public is invited to hear the revised plan on Thurs Oct 27 from 4p-9p in the Adler Room on the top floor of the Palisades Mall. The Federal Highway Administration, now the lead agency on the project, along with the Thruway Authority and the NYS Department of Transportation will give a presentation on the project at 5p and at 7p.

“We strongly urge the Governor to commit to pursuing the bus rapid transit component at the same time as the bridge replacement,” said Kate Slevin, executive director of Tri-State Transportation Campaign (TSTC). “Postponing the bus rapid transit option also goes against the facts and findings of a decade-long study process. There has consistently been support for transit to be included as part of the project, which is why all five options in the state environmental review include transit. None of those alternatives studied by the State Department of Transportation included a bridge replacement without a transit component,” she said.

‘€œMy concern is that they’re going to replace a 1955 bridge with another 1955 bridge,” said Westchester County Executive Rob Astorino on the Albany cable news program, Capital Tonight on Wednesday. “Bus rapid transit, or mass transit, has got to be a part of this new bridge to alleviate some of the concerns that everyone has in this region.’€ Without building in bus rapid transit and commuter rail, “I don’t know what we are going to accomplish other than spending a lot of money,” he said. Last July, The TSTC wrote that Astorino had proposed  dropping the mass transit component that would chiefly benefit Rockland to reduce the cost of the project.

If you can’t make the Rockland date, there will be a Westchester meeting on Tuesday Oct 25 at the Doubletree Hotel Tarrytown at 455 South Broadway. The public is invited to provide written and oral comments on the project at either meeting, or via email at tzbsite@dot.state.ny.us.