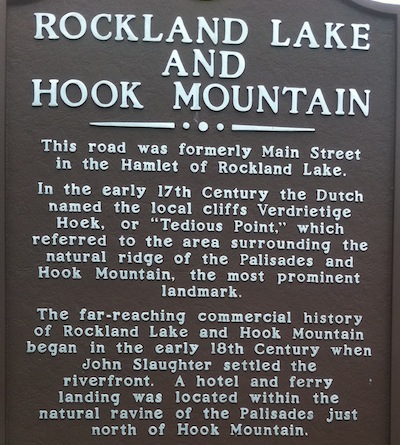 Wikipedia would have us believe that Rockland Lake Village died in 1926 when, while demolishing an old ice house, the residents themselves caused a fire that destroyed the majority of the Village of Rockland Lake effectively ending its’ existence.

In reality, less than a dozen buildings caught fire in a village of well over a thousand people. Though the glory days of fast clipper ships and crack steamers carrying Rockland Lake Ice all over the world had ended, the Village of Rockland Lake Village still survived. There was still work in the trap rock quarries and also in the hospitality industry.

John Slaughter settled the area on the Hudson below Rockland Lake in 1711 (the piers and docking area were called Slaughter’s Landing ). Harvesting of ice for storage purposes and meal enhancement at restaurants began commercially in the USA in 1805 and demand skyrocketed as modern convenience and the middle class both expanded to become part of the everyday life of the young USA. The Knickerbocker Ice Company incorporated at Rockland Lake in 1831 (changing the name officially from Quaspeck Lake). Rockland Lake was known to have had the cleanest and purest ice in the area. The stored ice was placed on inclined railroad cars, transported down the mountainside, placed on barges on the Hudson River, and shipped to New York City. So much ice was shipped that Rockland Lake became known as the Icehouse of New York City. The nearby Knickerbocker Fire House was established 1862. The Knickerbocker Ice Company closed in 1924 as commercial refrigeration and freezers took the place of Ice Harvesting.

After the ice, Rockland Lake gained a reputation as a resort area for visitors from New York City and the rest of the metropolitan area. I owe my own residency in Rockland County to that time period. My grandparents, lifelong New York City residents, maintained a summer and weekend bungalow cottage at Rockland Lake from pre-WWII until they were forced to leave it in the 1960s. My grandma, my mom and my uncle would spend most of the summer weeks at the lake while my grampy joined them on weekends. At the end of the summer, my grandma would return to her manager position at Lord & Taylor. Except for the coldest weeks of January and February, they’d come for weekends whenever possible.

My mom learned to drive here and took her drivers test in Nyack. The family would attend church at St Michael’s Roman Catholic Church in Rockland Lake on Sundays, bringing four welcome musical voices to the congregation. They saw movies in Nyack, had sodas at Woolworth’s, got prescriptions at Koblins and shoes at Glynns.

They fell in love with the area. When my mom and my uncle each married, they brought their new families to the area around Rockland Lake. They realized that Nyack and even Rockland Lake were too much for their newlywed 1950’s finances. My parents settled in Blauvelt and my uncle and aunt put down roots in West Nyack.

My grandparents considered Rockland County their second home and would frequently visit their Rockland Lake bungalow on weekends and summers. Rockland Lake Village still had many thriving vacation cottage and bungalow communities in the 50’s and early 60’s with local shops, a number of restaurants, cafes and lunch counters, tradespeople’s businesses, along with Gethsemane cemetery, the Rockland Lake Post Office, and the church, along with over a thousand year-round residents and several thousand seasonal residents.

But by 1965, it was almost all gone. The beautiful mission church St. Michael’s established in 1901, would be demolished by the state in 1963 six years before any serious park service work was done in its area. The post office closed its doors in 1965, effectively ending Rockland Lake’s existence as a place.

The firehouse still bravely struggles on, even to this day, and a few homes remain. As for the rest, taking a walk from the firehouse over the ridge and down to the Hudson along what was the main road of the old village brought me to a ghost town. This is where I found the ruins of houses, the old inclined railway, shipping piers, and the grand hotel that used to be right on the Hudson shore.

I found myself very sad, and oddly, a bit angry. Why destroy a living, breathing village? Greenspace is a wonderful thing, but at such a price? And sadly, so much of what had been inhabited is almost unreachable anyway it’s never been utilized or even properly cleaned and returned to wilderness. It was just taken away.

Some will say this was done for the benefit of all. On the great ledger of society, it may be that the loss of Rockland County’s mountain hamlets in Harriman State Park, the downtown South Nyack for the Thruway and the Village of Rockland Lake for a state park is a net gain for all. But that the gain does not come without sorrow or bitterness.

After all these years, my mother has NEVER returned to the spot that was the source of so much of her early happiness despite having lived just a few miles away in the ensuing 45 years. (She has promised she will come with me so I can give a more first hand tale from one of the old summer people). Before the park, Rockland Lake was a beautiful lake that was frequently used by city people and other non-residents who would come and rent here, or buy here, and shop the local stores and businesses during their summer stay. Now, busloads are shipped in from the city to use a man-made pool and then head back to the city just hours later without ever becoming involved in the local communities or adding to their economies while utilizing their resources resources that were taken AWAY from the locals.

Is this progress? Was this what was intended? Again, in light of the beauty that is Harriman State Park, the peace of Rockland Lake State Park, and the needed interstate and river crossing we have now perhaps it was a necessary sacrifice for the common good. However, time and time again Rockland has done its part for the common good but too infrequently gets anything back.

The recent fast-tracking of the new Tappan Zee Bridge has brought back fears well-founded of homeowners forced to move because of state and federal projects. Not only did the New York State Thruway and the Tappan Zee Bridge project cut a wide swath across the middle portion of the county, but the state conservation movement decided, in the name of open space to condemn and forcibly move a good number of Rockland’s villages and hamlets. We tend to think of Harriman State Park and Hook Mountain State Park, and Tallman and the like as intelligently saved pristine old-growth forest. They are not. Most of the area now in our State Parks was taken from Rockland residents whose families had lived there for centuries. At the bottom of Lake Welch resides the former village of Sandyfield, settled in 1760, condemned in 1928 with the last residents REMOVED from their homes in 1939. Or how about Doodletown? Settled by French Huguenots in 1762, their descendents would be the last to leave more than 200 years later when the state used the power of eminent domain to seize their homes, church, school, business district and two cemeteries. The remains of the late 1790’s village of Johnsontown still occupied when Harriman and Bear Mountain State Parks were created, lies beneath Lake Sebego and Lake Kanawauke. The hamlet founded in 1724 by the Conklin family on Pine Meadow Lake was bulldozed in the 1960s for a series of 35 camps for urban children that have yet to be built in 2011. Sterlington was also wiped from the maps, St. John’s in the Wilderness no longer has a village around it and caters to a congregation of memories and regrets. In all cases, despite some propaganda from the state, the residents did NOT want to go, and were certainly not compensated properly for loss of property.

I hope that those in charge take serious consideration of just how much this area has sacrificed to the common good before they plunge into the sadly necessary need to rebuild the bridge. Before anymore homes, dreams, communities, memories and history get trampled in the mad rush of expediency and for the common good may those in power take some time to consider treading as lightly as is humanly possible in a place that has already sacrificed so much of itself. Karma is supposed to come around, isn’t it?

Hey Albany, are you listening?