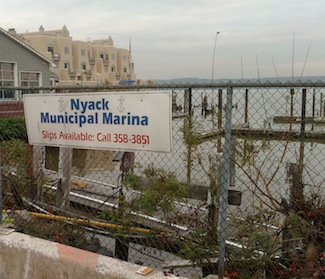 Over the past year, the Nyack Village Board has discussed one recurring order of business: the renovation and repair of the Nyack Marina, which has now been closed for two seasons.

According to Nyack’s mayor and  village trustees, the good news is that if all goes according to plan, the Nyack Marina will re-open next spring with new bulkheads, renovated boat slips for seasonal’€”and perhaps transient’€”boat owners, a safer power-boat launch for day-trippers, and a new eco-dock for human-powered watercraft that is already being used by the River Rowing Association, as well as kayakers and canoers.

And this fall and winter, the Nyack Parks Commission, in conjunction with the mayor and the Village Board, will be conducting an outreach to local marina operators and individuals to discuss having a third-party operator come in and run the Nyack Marina for the village.

Marina Repairs: What Will They Cost?
Marina repairs are expected to begin shortly, perhaps as early as the first week of November. Earlier this summer, the village issued a request for proposal (RFP) for the repair work, but potential applicants felt that the materials and some construction methods in the proposal were outdated, and the village received just a single bid. As a result, the RFP was revised and re-issued. The new proposal was simultaneously sent to FEMA for its approval of the changes in the scope of the project, which it has granted.

After the revised RFP was issued, the village received two bids for repair of the marina; Cal-Mart Enterprises, of Congers, NY, was the low bidder and was just awarded the contract. The base bid was about $650,000 but with the other improvements, including a completely new southern bulkhead, upgraded electrical and water supplies to the slips and repairs to the parking lots, the total cost of the improvements will come to about $1.04 million.

Because of how FEMA works’€”essentially, the village makes the repairs and then gets reimbursed by FEMA at the end of the construction’€”the Nyack Village Board has passed a bonding resolution that will cover the out-of-pocket shortfall. Insurance will cover almost $300,000 of the cost once invoices are submitted, and an $850,000 bond will cover the rest until FEMA reimburses the Village. The exact amount of FEMA’s contribution won’t be determined until the village’s claim has been submitted, but the board believes the marina is an important village asset that must be open in order for Nyack to move forward with the waterfront redevelopment process.

What will be fixed?
Given its current state, many of us would like to see a completely new marina. However, the scope of the project is restorative in nature; the only real new improvements will be upgraded electric and water services, which replace current outdated’€”and in some instances, out-of-code’€”facilities. Instead, the construction will return the marina to its original’€”albeit a more modern and safer’€”condition. The biggest job will be replacing the southern and parts of the western bulkheads. The marina will also get new gangways, walkways, and boat slips, and the parking lot and fencing will be repaired. According to Village Trustee Jen Laird White, the new sheet-walled bulkheads will not only be more attractive and longer-lasting than the current ones, they’re also better for the environment.

Construction is expected to begin sometime in the next two weeks, and will continue throughout the winter with the goal of the marina being open for business next spring, according to Mayor Richard Kavesh. ‘€œWe’re planning for a full, open season starting in the spring, 2012. This will be a tremendous boon for Nyack and for all of us who love boating on the Hudson.’€

Although the current Village Board and mayor are willing to have the village operate the marina this season, it is their strong preference to bring in an experienced, third-party marina operator to run the facility. Over the winter, the Village Board and the Parks Commission will be meeting with interested parties to discuss the various options available within the marina, including a possible expansion of marina activities and facilities. Several local operators have already expressed an interest in the project and discussing what they believe is feasible given the marina’s size and layout.

‘€œA decade ago the village threw good money after a wonderful asset, and then failed to maximize that asset for the benefit of Nyack,’€ says trustee Steve Knowlton, who’s been the village’s main liaison for the marina project. ‘€œThe destruction of the marina during the storm provided us with an opportunity to really do what should have been done a dozen years ago’€”to make our marina one of Nyack’s and Rockland County’s premium waterfront assets.’€

Joining the Marina and Memorial Park
The redevelopment of the marina also dovetails with the Nyack’s planned renovations for Memorial Park, which will include the removal of the tennis courts, replacing the basketball court (via a $70,000 grant) with a new one on the north side of the park, relocating the gazebo, and constructing a new children’s garden.  The conceptual master plan also calls for the removal of much of the waterfront parking to provide more open space for playing fields, as well as more greenspace with direct access to the water. Most of the current Memorial Park parking would be moved to the renovated Nyack Marina, with a planned walkway either adjacent to, or crossing over, the northern inlet joining the two properties. The village is currently preparing a grant application to cover engineering, an easement purchase, and the construction of a bridge or walkway to provide access to and from both properties.

‘€œThe waterfront is Nyack’s greatest underutilized asset. It’s taken a long time to get here, but all of the hard work is starting to come to fruition and I think we are realizing the dream of a more vibrant park with more activity for all– playing fields, gardens, areas for sports, access to the water–not to mention a healthier way to border our river,’€ says White. ‘€œIt’s an exciting time for the Village.’€

For all of us involved with the marina, it’s gratifying to see the project finally moving forward with a clear completion date after what seemed like unending months of gestation. The Parks Commission is currently setting up informal meetings with individuals and entities that might be interested in operating the marina. If you’d like more information or to schedule a meeting, contact either Bruce Kenney or Marcy Denker who are heading the Parks Commission marina committee.

James Willcox is co-chairman of the Nyack Parks Commission. He can be reached at jim.willcox@gmail.com.