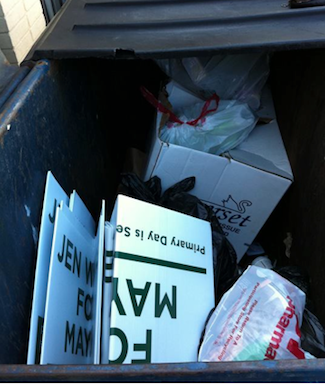 Nyack, Sept 2 — For the second time this campaign season, mayoral candidate Jen White’s lawn signs have been stolen. Thanks to a tip, the signs were subsequently discovered in a dumpster behind the Chase Bank. The police are reviewing the bank’s security tapes to see if they can determine who’s been swiping and dumping.

Is this really happening in Nyack?  Are supporters of Mayor Kavesh involved in stealing and trashing signs endorsing his competition?

I hope Mayor Richard Kavesh will address his supporters and ask them not to express their support for him through vandalism.

Editor’s Note: Ben Donahower, CampaignTrailYardSigns.com, wrote the book on campaign lawn signs. Literally. In his blog post about sign theft, Donahower writes “Stealing signs doesn’t help the candidate that you’re supporting.  In fact, it will motivate the other candidate’s volunteers and cause bad press for the candidate that the thief is trying to help.”