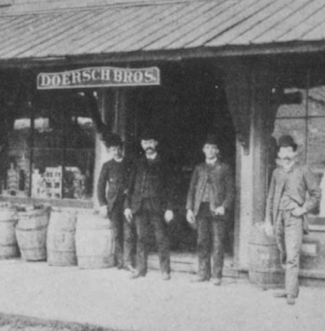 The Wigwam, a business on South Broadway (circa 1880). Horace Greeley spoke here, September 1st, 1868. "The whole County attended, roofs and windows filled, 1500 present, 300 turned away.' Most town events centered here in this old hall 'when Grant was President.'

It sure is political season, isn’t it? Inspired by the Nyack Library’s local history picture of the month, I’ve decided to discuss a very famous man’s political speech not 100 feet from where Nyack’s mayoral candidates debated last week.

The photo shows the Doersch Brothers Grocery, which was located just steps away from the current Nyack Center in the building that would come to be known as the Broadway Theater, then the Tappan Zee Playhouse. Currently the closed Chef’s Market occupies the spot ‘€“ a spot that began as a warehouse and closed, became a grocery and closed, then a movie theater that closed for 27 years, then a live theater that closed, then rebuilt as a grocery’€¦ that closed.

One of the topics in the mayor’s debate was the economy and the state of downtown businesses, and on September 1, 1868, Horace Greeley stopped by to make a political speech discussing very similar issues and 1500 people filled what would become the Tappan Zee Playhouse while another 300 had to be turned away. Greeley opposed monopolies and the vast accumulation of wealth by real estate developers who bamboozled the public with schemes that seemed to promise wonderful things for everyone but at heart were nothing more than ways to line the developers’ pockets. His own paper, The New York Tribune, opened up the closed doors of Congress and the railroad barons. He openly opposed government subsidies for the already profitable railroad barons and real estate speculators along with the vast wealth being acquired by a very few while jobs were lost all across the country. Greely’s speech discussed his insistence that the federal and state governments should be instituting high protective tariffs and sponsoring internal improvements and infrastructure support for the benefit of everyone rather than creating laws and regulations that benefited the few.

Horace Greeley was a fascinating, quirky and sometimes self-contradicting figure ‘€“ no wonder all of Nyack turned out to see him, he must have fit in perfectly! And by the way, he never said: ‘€œGo West Young Man’€’€¦ that’s a never uttered paraphrase ranking right up there with ‘€œPlay It Again Sam’€ and ‘€œBeam Me Up Scotty.’€ Born in New Hampshire, he moved to New York City in 1831 and by 1834 was involved with the publishing of The New Yorker joining his name to political reforms along with such luminaries as William Seward (who’d become Lincoln’s Secretary of State and purchased Alaska for the USA).

He established his daily New York Tribune and its’ weekly national version The Tribune in 1841. He was a great supporter of workers rights and his own business reflected that: excellent work conditions and hours, a profit-sharing plan, organization of his workers and cooperative groupings. His paper garnered great respect for its higher tone, lack of sensationalism, cultural additions like book reviews and straightforward reporting. It also gained him a large following to whom he could present his views and causes. He espoused Women’s Rights and suffrage and opposed Slavery ‘€“ though he bemoaned both the political machinations and the sometimes violent behavior of some Abolitionists. He supported the Temperance movement to a point. He opposed the Mexican War feeling that it only benefited the slave owners of the south. He was appointed to fill a Congressional vacancy in 1848 but only served 3 months as he continually reported on what REALLY went on behind closed doors in Washington and his editorials strongly condemning the Kansas-Nebraska Act (effectively opening the possibility of additional slave states in the northern prairie territories ‘€“ resulting in rioting, death and political upheaval in ‘€œBleeding Kansas’€) would prove to put a gulf between Greeley and his former friend Seward. Greeley’s support of a gentleman named Abraham Lincoln over the Republican Party’s chosen frontrunner ‘€“ William Seward ‘€“ served to clinch Lincoln’s nomination and Seward’s everlasting hatred.

Though he supported Lincoln, Greeley was not one to let things rest when he perceived what he believed was injustice or political posturing. He was tough in Lincoln and initially argued that we were better off without the South and should let them secede. He did eventually come to Lincoln’s way of thinking regarding preserving the Union as a whole, but stridently criticized Lincoln for not freeing the slaves immediately. He was not one to wait for change to come, he demanded it now, and did everything he could to become part of the change himself. Perhaps that passion was what brought so many people (a very large crowd for Rockland County in the 1860s) out to listen to him speak.

Oddly, after the Civil War, Greeley supported amnesty for Confederate Officers and angered many Northern supporters by posting bail for Jefferson Davis! He did continue his support for universal suffrage for all races and for women, and the rights of workers. He was not an avid expansionist, but rather recommended an orderly westward movement. What he really said was ‘€œThe best business you can go into you will find on your father’s farm or in his workshop. If you have no family or friends to aid you, and no prospect open to you there, turn your face to the great West and there build up your home and fortune.’€ He was frequently misquoted in his lifetime too, and once quipped, ‘€œI never said all Democrats were saloonkeepers; what I said was that all saloonkeepers are Democrats.’€

He was a man of diverse and sometimes odd interests that ranged from literacy to election reform to spiritualism to phrenology – and really, advocating Women’s Rights in the mid-1800s? He was never seen in public without his full-length duster coat and his bright shiny umbrella even on the hottest and sunniest of days. And yet, even after his public gaffe with ol’ Jeff Davis, he remained immensely popular. In 1872 he would become the Presidential Candidate for BOTH the Democratic Party and the then existent Liberal-Republican Party. In his acceptance speech of the Liberal-Republican nomination, he said ‘€œThe masses of our countrymen, North and South, are eager to clasp hands across the bloody chasm which has so long divided them.’€ But a Greeley Presidency was not to be ‘€“ he lost steam and all interest in the subject when his wife tragically died, and he foundered without her, dying of a broken heart and loneliness just a few weeks after the election to which he paid such little attention. He had garnered 44% of the popular vote and his electoral college votes were posthumously assigned to three candidates of minority parties.

Horace Greeley was a real American Character, and one of the finest compliments I’ve ever received was from someone who called me ‘€˜Horace Greeley, Jr.’ intending it as an insult. For Horace Greeley firmly believed that the USA’s best times were ahead, and that only by joining together ‘€“ North and South, Male and Female, Worker and Employer, Democrat and Republican, White, Black, Native or any other ethnicity ‘€“ would we find our best destiny and fulfill the dreams of our Founding Fathers. I’d like to think that those were precisely the reasons that on that day in September of 1868 so much of Nyack turned out to listen to a political speech.