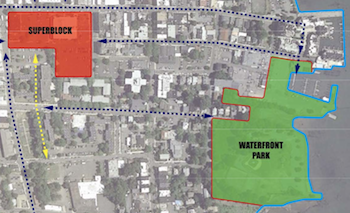 Nyack, Sept 6 — (Updated with comments from Trustee Candidate Marie Lorenzini) — This is the third and final Issue of the Week, a series that asks the two mayoral and two Village Board candidates to comment on one topic each week. Mayor Richard Kavesh is running for re-election against Trustee Jen White. Incumbent Trustee Doug Foster and former Trustee Marie Lorenzini are running for two open seats on the Village Board. Previous topics in this series included Nyack’s Downtown Businesses and Local Government Consolidation.

This Week’s Question: What should be done with Nyack’s downtown redevelopment Superblock project?

Mayoral Candidate Richard Kavesh: Ever since Riverspace proposed redeveloping the ‘€œSuperblock’€ 5+ years ago, I’ve kept an open mind and listened carefully to hundreds of residents, merchants, visitors, and planners.

The redevelopment of an arts-centered Superblock is based on this syllogism: ‘€œsince an arts center can’t be self-sustaining, we need to surround it with development sufficiently large and profitable to cover the inevitable losses.’€

All the experts we’ve hired tell us Nyack has the regional audience for a successful arts center. Developing the rest of the Superblock is more problematic: More…

Trustee Candidate Doug Foster: Nobody wanted to build the ‘€œSuperblock’€ the way it is today; it is an incomplete urban renewal project that ran out of federal funding and the result is a sea of asphalt functioning as surface parking.  It is ‘€œLost Space’€ at the heart of our downtown.

I have never heard anybody say they like the SuperBlock the way it is now, so the question is, how do we want to change it?  What do we want there? How are we going to accomplish it?

In the last few years, culminating in our feasibility study, we have defined an overall vision on what we want there.  We want mixed use, with significant housing, retail, public amenities and a regional cultural arts center.  The architecture needs to enhance but not overwhelm our downtown. More…

Mayoral Candidate Jen White: I have a dream for Nyack. That dream includes our native son and daughter, Edward Hopper and Helen Hayes, together on Main Street. It is this dream that informs my vision for the development of the so-called ‘€œsuperblock’€.

I imagine Nyack’s own Hopper House running a small museum with paintings on loan from the Whitney Museum of American Art and a reasonable sized theater, named for Helen Hayes, that can give Rivertown Films a home, allow for jazz concerts, conversations with interesting folks and a place for all of us to see theater or watch our children perform.  Programming that teaches our kids and our seniors how to sing and dance, wrapped in a project that restores our Main Street to what it was before urban renewal came along and replaced it with something that most can agree doesn’t really work or look anything like the way we imagine our village.

We need a place that houses a meat market, a fish market, a place to buy house wares or stationery or get your shoes fixed; a place for people to live in our downtown, creating the foot traffic that we desire and the improved tax base that will help reduce our dependence on parking revenues; a place that is green both inside and out and a place that has events that happen during the day so that as many people visit Nyack before the sun sets as do after.

This location is the most debated piece of property in Nyack; the foolishly named ‘€œSuperblock’€, an overreaching title for a piece of prime downtown real estate. More…

Trustee Candidate Marie Lorenzini: As a longtime Nyack resident, I believe it is essential that the village continue to offer the milieu of creativity, the arts and diversity that have also served as a catalyst to bolstering our local businesses.  Going back to my first job in Nyack, when I worked across the street from the original Tappan Zee Playhouse, I recall being so invigorated to see the throngs of patrons arriving at the theatre. There was an excitement that emanated from all part of the village. Residents and tourist visited regularly. But as happens in the course of history, tough economic times impact communities and in the case of the TZ Playhouse, not only did the fiscal situation become worse, events lead to a change in ownership and the ultimate closure of the theatre.

But our village and its residents are resilient. And as a hands-on, proactive individual, I joined with fellow village activists volunteering my time in an effort to reopen a theatre by fundraising, planning a Helen Hayes 90 Birthday party at the Plaza Hotel in NYC, doing mailings, speaking to groups and prospective sponsors, and doing all that was needed to bring back a program or theatre that would replicate what the Tappan Zee Playhouse had represented to the Village of Nyack. We were successful. More…