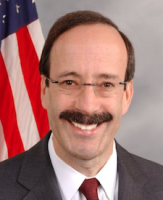 Washington DC, Sept 8 — Rockland’s representative in Washington likes what the he heard about jobs and bipartisanship last night during President Barrack Obama’s speech to a joint session of Congress. ‘€œTonight needs to be a defining moment for the 112th Congress,” said Congressman Eliot Engel (D-NY-17) . “We can put partisan politics aside and work to put America back to work, or we can remain on the sidelines and continue to throw rhetorical bombs at each other.  This will only prolong the suffering of our fellow unemployed Americans.  I am committed to reaching out to my colleagues to work together and help end the misery.’€

However, Engel continued to express skepticism about Republican motives and their commitment to with Democrats to get the economy back on track.  ‘€œThe Republican House promised a ‘€˜laser-like’ focus on jobs during the 2010 campaign, and they have failed to produce a single jobs bill.  After the Republican Senate filibustered every jobs bill in 2010, this doesn’t come as a surprise.  However, this is too important of an issue to be bogged down in the partisan politics of the past.  Out-of-work Americans know no political affiliation.”

‘€œThere are many ways we can save and create jobs, if we choose to work together,” Engel said. “There is common ground, but both sides need to have the political courage to find it.  I call on my colleagues to remember why we are here in Washington, and to keep the millions of American families and businesses struggling to make ends meet in mind when we discuss these proposals,” hew said.