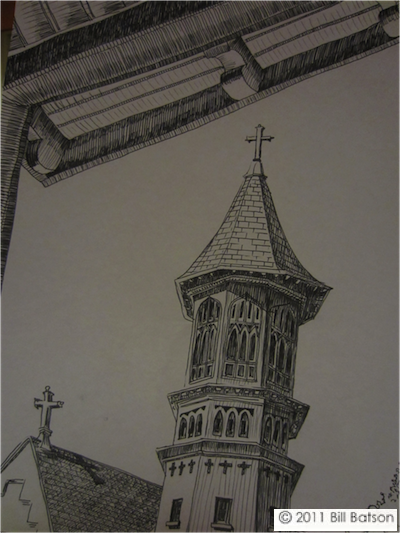 I have a new appreciation for shelter having spent the summer outside sketching Nyack. The heat, the rain, the wind, the insects and the man-made plague, the car, have challenged my every day. I have somehow managed to turn art-making into an endurance sport. I was not deterred by any of these adversities, but my awareness of the vicissitudes of the outdoors has been acutely heightened by this project.

One soggy morning in early August, on the third straight day of rain, my eye caught the Bell Tower of St. Ann’s church, stopping me in my tracks, despite the inclement weather. The gray sky as a back drop held the tower in sharp relief, as if the building itself had been placed on a mat for framing. The diffused light allowed my eye to trace the contours of the bell inside the tower. I felt as though I could reach out and touch the coarse black iron of the tower’s bell and feel the thickness and the cold of the metal. But I couldn’t sit and draw from curbside as I normally do. The rain would have turned my paper into pulp and my ink lines into water color. That’s when I saw a yard sign in front of the house I was standing next to that shouted in green text on a white back drop: Jen White for Mayor.

Behind the sign was a low wooden porch with two rocking chairs, facing the object of my artistic attention. I longed to step on to the porch, sit in the rocking chair and draw the scene as the rain was held at bay by the open roofed structure. Fortunately, this impulse was controlled by my familiarity with the penalties for trespassing, but there was a providential sign that gave me hope. The campaign sign: Jen White for Mayor.

I had met Jen White a few weeks before this day and had been volunteering for her campaign. I thought to myself that Jen would probably know the owners of this house and maybe she would put in a good word for me. Boy was I right. Jen immediately contacted the family and within an hour of the thought, while still damp from the rain delayed effort, I was invited to sit on the porch by the owners.

These are the moments when you realize that Nyack is a village. Our inhabitants are open to expressions of humanity that are foreign to city folks and suburbanites. And we have leaders, like Jen White, who will pause in the midst of their official responsibilities and political contests, to cater to the esoteric requests of a relative stranger. In biblical times and in ancient myth, cultures and individuals were harshly judged by the level of comfort they afforded to strangers. Nyack might pass such a test.

The day I returned to draw was bright and mild, but it made the porch retreat no less satisfying. As I swayed in the wooden rocker, with a warm cup of coffee provided by my generous hosts, my pen found its path and an image of a church bell tower grew on the page. I could not help but include the overhang of the porch as part of the perspective. The church is in the background of this story; this drawing is as much about the porch and sanctuary as anything else: and about a sign that guided me to a safe haven.

The Jen White for Mayor sign worked for me like hoboglyphs did for the unemployed transient during the depression. It was a coded message that signaled to me that inhabitants might be open to assisting an artist in need. Hobos, the strangers of the depression era, would leave secret symbols as they moved through a region to alert the next wave of job, food and shelter hunters where they could expect succor and more importantly, where they should steer clear. This sign gave me the shelter from a perfect storm of bad weather and logistics that allowed me to continue my project to chronicle the man-made landscape of Nyack with pen and ink. The drawing that resulted from this act of hospitality will always remind me of how cool a place Nyack can be.

Advertisement. Scroll to continue reading.
In this article:bill batson, Politics/Elections