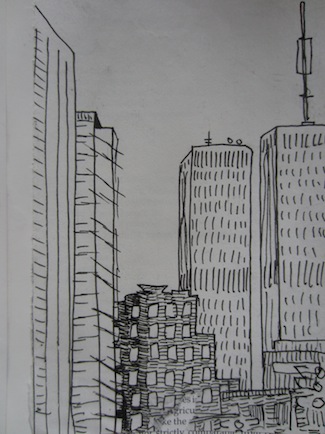 On 9/11 I think of my friend John Perry.  He was a NYC beat cop who was also active in the ACLU. Yes, he was a rare bird. After finishing law school and passing the bar, he had accepted a position at a law firm and on September 11, 2001, he went to One Police Plaza to hand in his badge and shield and start his life as a constitutional lawyer.

I waved goodbye to him as he descended the stairs at the 72nd street IRT. We were working on a political campaign together and had been up since 5a  hanging signs.  As I turned to walk back to the office, I thought to myself, as many did, what a beautiful morning and what an auspicious day to end one career and start another.

I was the campaign manager for Norman Siegel, who was running for the office of New York City Public Advocate.  John was our star volunteer.  Our campaign headquarters was in a store front next to a hardware store on 72nd between Broadway and Columbus Avenue.

As the second the plane hit you could hear the cell phones of people walking down the street ringing as news of what happened traveled by word of mouth. Then a crowd formed in front of the hardware store next to us as people watched the smoke billowing skyward from the South Tower on the TV sets in their display window.  Others walked to the corner of Broadway to see the smoke rise with their own eyes. I knew right away that John would be racing to the Twin Towers.

According to eyewitnesses, John saw the first plane hit while he was leaving One Police Plaza.  He was seen buying an NYPD tee-shirt from a vendor. He needed the shirt because he had just given up his badge, but that didn’t stop him from being a cop and doing his job on the day he was needed most.  Later, he was seen racing into the towers. He was never seen alive again.

His mother started calling the campaign office around 9:30a. I think I still have several of the phone message slips that campaign volunteers used to record her pleas. She wanted to know if we had seen her son. When I told her what I knew and that I had seen him heading downtown before the attack, she fell silent.  We both knew the truth.

About an hour after the first tower collapsed, a steady stream of men and women, all shaded gray from pulverized concrete, with tears cutting a path through their dust covered faces, marched past our store front.  They walked aimlessly, like war refugees.  Some people who lived to the south, in Brooklyn, marched north, driven by fear and confusion.

The campaign was cancelled. We comforted each other and some of the wandering masses. News of the Pentagon attack left me feeling as though more passenger plane missiles were heading our way.  Yet the enormity of it all left us numb, not nervous.

We couldn’t send anyone home because the bridges and tunnels were closed, so we sheltered in place.  Under a sky so beautiful it mocked us, we thought about the man who had walked away that morning and would never come back; a man who was at the end, what he always was: the best of us.  On 9/11 I think of John Perry and I am sorry that you will never know him.