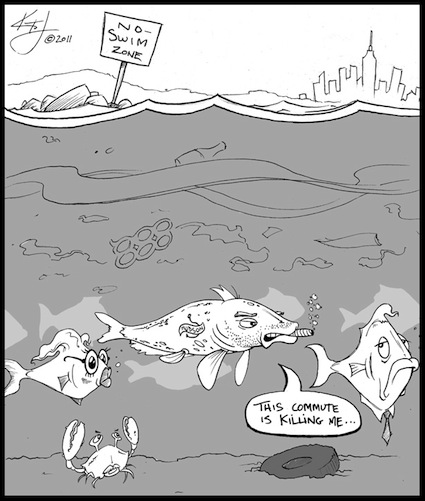 It’s been a tough summer for Hudson River enthusiasts, with July and August sewage spills and a Riverkeeper/Lamont Doherty Earth Observatory report last week that says the river was untouchable 25 percent of the time between 2006 and 2010. But if you think it’s tough living near the river, just be glad you don’t live in it.

Illustrator Kipp Jarden is a Nyack native with a BFA in animation from Savannah College of Art and Design who has a passion for creating visual art, especially in traditional forms such as hand-drawn animation and illustration. ‘€œIt Takes a Village: Swimming With The Fishes‘€ #20110813 Copyright 2011, Kipp Jarden