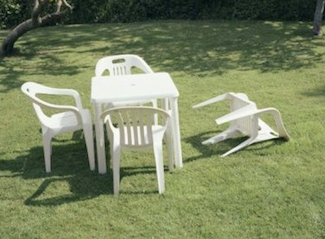 Washington DC Devastation:"Thanks to all of you for your kind words of support, as we look to recover from the devastation of today's quake!" Source: jmckinley's posterous

For anyone fascinated with signs that the end of the world is near, this week is filled with harbingers of ill things to come.

On Tuesday there was an earthquake which sent serious rumbles through the news media and was felt in the far corners of the globe reached by anyone with Cable TV or an Internet connection.

This weekend, Hurricane Irene threatens to wreck havoc on the next to last weekend of the summer.

The news doesn’t always tell you about what people care about. Sometimes the best way to figure out people’s concerns is to watch them. It’s more accurate than asking them — and infinitely more interesting than listening to the man-on-the-street interviews on news radio.

Apparently A LOT of us care about earthquakes — and what they might do. On Sudden Shake Tuesday, nine of the top 20 keywords searched on Google were earthquake related. Locally, one of the top searches on NyackNewsAndViews was “Indian Point” and “Earthquake,” pulling up a now mostly discredited story from MSNBC about Indian Point and Earthquakes. There are some very good reasons to close Indian Point — but the risk from earthquakes and tsunamis doesn’t make the top ten. Whether or not earthquakes are a threat isn’t the point. What’s important is that when the ground became to shake, people began to search for this news. Perception is reality.

Given the week so far, I can’t wait to see what the weekend will bring. Meanwhile — can someone check the Mayan calendar one more time and tell me if I should go to the beach this weekend?