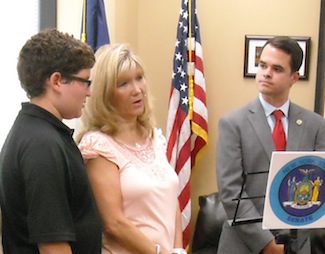 New City, August 17 — NYS Senator David Carlucci (D-Rockland/Orange) spent Wednesday in New City with  the Rothstein family and learned a little bit about how tricky the health care system can be for a typical family. Carlucci is working on legislation that requires emergency medical facilities to tell patients if the doctor who they are seeing is out of their insurance network.

Nathan Rothstein, 14, was bitten by a dog and needed to be seen in an emergency room.  His parents, Debra and Jeffrey took him to an in-network hospital where they were told Nathan’s wounds were too deep and a plastic surgeon needed to be called in.  The surgeon who was on call that day was an out-of-network doctor, but the Rothsteins were not informed of that until they went to his office to have the bandages removed and were handed a bill.

According to the New York State Insurance Department, hospitals are not required to inform patients if they are going to be treated by an out-of-network physician.

‘€œGoing through this ordeal has created a tremendous strain in our household both financially and emotionally,” said Debra Rothstein. “Getting an unexpected bill at a time when finances are difficult made us nervous wrecks.’€

Carlucci will ask GHI and the New York State Insurance Department to work with the Rothsteins to come to an agreement of payment that is not overly burdensome.  In an effort to prevent this situation from happening to other New Yorkers, Senator Carlucci is working on legislation that will require emergency medical facilities to inform patients who have insurance  if the doctor they are being treated by is out-of ‘€“network, giving them an opportunity to agree to see that doctor or to request an in-network physician.

‘€œWhen people go to the emergency room, they are generally already anxious about the injury or illness they are  being treated for.  They should not have the added anxiety of whether or not they are unknowingly being treated by an out-of network physician and are going to be responsible for a huge bill,’€  Senator Carlucci said.  ‘€œSimply requiring emergency facilities to inform patients before they are treated will alleviate New Yorkers from additional emotional and financial stress when they are facing a medical emergency.’€