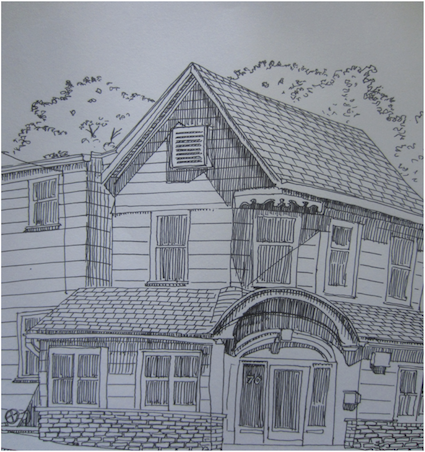 I suspect that the building in this drawing will soon be demolished. I feel like every non-residential building in Nyack that I draw is on the chopping block; Hilltop Restaurant, the antique shop next door, Moger’s Gas Station and soon this building that was once Wet and Wild cosmetics. I passed Hilltop and noticed that the iconic neon sign had been torn down. Watching the slow motion dismemberment of this Nyack landmark has been painful. The building will soon be leveled, along with the neighboring house and Moger’s to make way for a Walgreens. Can you hear the rumble of stampeding rogue elephants?

Enough time has passed for communities to be extremely skeptical, if not dismissive of the notion that the arrival of a Walgreens (or Wal-Mart for that matter) is a benefit to the community. In our hunger for lower prices and convenience, we have bartered well paying for dead end jobs, unique for generic facades and friendly local owners for impersonal corporate overlords. Communities across America have been promised for decades that new development would improve the quality of our lives and the value of our property. The evidence is building that while a changing physical landscape is inevitable, improvement is not.
I remember when the re-development of 42nd Street began. My commute became a disorienting march through a constantly shifting environment as the Disneyfaction of Times Square was accomplished. I was bewildered when the skyline that I bid farewell to one evening was not the same one that greeted me the next day. Had our ancestors ever been forced to witness the instantaneous transformation of their landscape? Only when they were visited by invaders or natural disasters, I suppose.

I felt effects akin to reverse root shock. I had not been uprooted, but the soil around me and the shade and the sun above me had been shifted. For a moment, I day dreamed that the buildings were being removed and not replaced so that the resulting green space and sun light would actually make life in the overcrowded city more pleasant. But in a country where even ‘€œair space’€ is bought and sold, you can bet that when something is torn down, a skyscraper or boring box store and not a tree will be planted.

So when I finish a drawing of a building in Nyack, the thought occurs to me, have I just drawn an obituary? How do we exert some control over the inevitable transformation of our landscape? A popular buzz word in advertising today is hyper local. Can we create a hyper local development policy that un-couples our fate from the national and international economy and creates a self reliant and sustainable community? If we don’t delink, what will our community look like in five, fifteen or fifty years?

Many of the buildings that I draw in Nyack used to be something else; a vanilla or tub and pail factory or a hotel. The building in this drawing was once the headquarters for Wet and Wild cosmetics. The owners of these businesses and this building are naturally only responsible to themselves and their shareholders, so as the properties change hands and purposes, we can only watch and hope that the next manifestation will be beneficial. How do we play more of a role than passive optimistic observer?

I chose this subject because the top of this building seems like it is being twisted off like a bottle cap by an unseen giant. That is what development in America has become; a dynamic of unseen gigantic forces tossing around buildings on a virtual monopoly board, that happens to be where we live. And like monopoly, the players ruthlessly try to win, indifferent to the collateral damage of their bellicose economic structure. In the heat of battle, customers, residents and workers are in peril as Walgreens wallops Rite Aid and Target tackles Wal-Mart. An African saying comes to mind: when the elephants are fighting, only the grass gets hurt. We would be wise to be wary of these corporate rogue elephants; they make lousy neighbors and are bad for children and other living things.