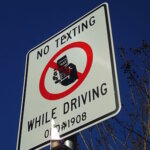 As of July 12, texting while driving is a primary offense in New York State. But if you can’t bear the thought of missing a message while behind the wheel, a Nicholson, GA mom and entrepreneur has a solution.

Last May, Kathy Lombardo created Text2Go, a service that provides 24/7 “on demand texting” for those on the go who need to know NOW what that last cell phone chime means.  Starting at about $20 a month, Text2Go members can her call service and text, email and tweet while they drive. A live person on the phone takes the call and handles each interaction.

Last year all New York police agencies ‘€” from the state police to village police departments ‘€” issued more than 3,000 tickets to drivers caught texting, a secondary offense at the time. In California, where texting is a primary offense, a similar number of tickets were issued by just one agency. In New Jersey, where this is also a primary offense, they issue about 10,000 citations each month.

Lombardo says making this behavior illegal won’t make the problem go away. “Simply enacting a law against texting isn’t enough to make our roads safer, says the 33-year-old married mother of four. ‘€œThat’s not a solution. If it was, we wouldn’t have this epidemic,’€

Lombardo says she’s negotiating with several insurance companies to offer customers a discount when they subscribe to  Text2Go.

According to the National Highway Traffic Safety Administration, 16 percent of fatal accidents in 2009 were due to distracted driving. A national study by AAA found 1 in 5 drivers text or read e-mails while driving. With the new distracted driving law now in effect,  New York joins nine other states in categorizing the use of handheld devices while driving a primary offense ‘€” California, Connecticut, Delaware, Maryland, Nevada, New Jersey, Oregon, Utah, and Washington ‘€” as well as the District of Columbia. According to the Governors Highway Safety Association, 34 states, Washington, D.C. and Guam have all banned text messaging while driving. An additional seven states prohibit new drivers from text messaging behind the wheel.