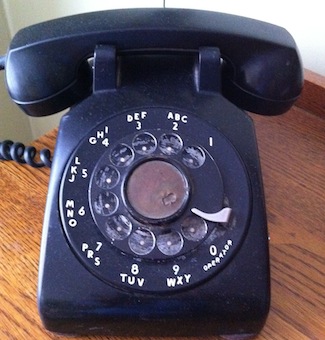 Nyack, July 12 –With two bear scares, a pair of flash floods and a boil water alert in the last 30 days, local officials have been quick to jump on Reverse 911 as a quick fix for keeping the public informed in the event of an emergency. Nyack Mayor Richard Kavesh got a lot of press last week with hits in the Journal News, WCBS-TV and Cablevision’s News 12 channel telling everyone why the village needs its own reverse 911 system.

But unlike what you might see on E! from the Karsdashians, this is not a tell all story.

Because of Nyack’s unique make-up, Reverse 911 is likely to miss between a third and one-half of village residents. Reverse 911 technology is literally your father’s phone system: if you live in a cell phone only household or you have IP phone service from Vonage or Cablevision,  you probably will never get a Reverse 911 call.

Which people does this effect? If you are young or in a minority, it’s likely that you don’t have a land line phone. A 2010 Pew Research Center study reported that about one in four Americans lack land lines and only have cell phones.  About half of all 25 to 29 year-olds have “cut the cord” and approximately one-third of Hispanics ages 18 and older are all wireless as well. African American adults are 18 percent more likely and adults who live in Spanish language dominant homes are 56 percent more likely to be cell only.

Effectively communicating with all segments of the population is especially important given the recently released 2010 census results for the Village of Nyack. Minorities are almost a majority in the village:  four in ten Nyack residents are part of a minority group. African Americans make up most of that number (one in four Nyack residents told census takers they were black or African American). Statistically, land line owners tend to be older and white while Nyack is younger and has a larger minority population and therefore less likely to have a wired phone connection. The odds are that Reverse 911 will reach fewer people in Nyack than in many other places.

In the event of an emergency, there are better ways to get the word out to village residents. Let’s face it, Nyack is about as dense as you can get: the 2010 census says the village’s 6,765 residents are crammed into a little less than one square mile. Just like the fire siren which used to tell parents of school-age children about snow days, a special blast could be sounded to alert people to visit the village Web page, check local news sources or call a special number for a recorded message. With cell phone penetration in the village likely to be higher than 90 percent, residents could also sign up to receive email messages or text alerts the next time our local government needs to deliver an important message.

Maybe it’s not fair to criticize Nyack’s mayor and local journalists for jumping on Reverse 911 as a solution to our communications problems. The system has worked well for many communities in the past. But given what we know about the latest census data, its time to stop living in the past and start planning for the future.