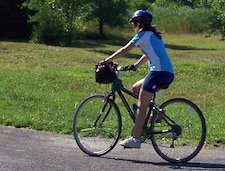 It’s been almost three months since my near death experience. And since that moment, I have frequently thought about what transpired during that second of time.

I was exactly one second away from a serious accident on a otherwise quiet, peaceful Easter Sunday morning on North Broadway in Nyack.

A guy in a silver SUV ran the stop sign at the corner of 5th Ave and North Broadway, turning North toward Upper Nyack. I know he didn’t see me — because I looked right at him and he never made eye contact. In fact, he never looked to the left at all.

If this was about being in the right, he was wrong — the interserction of 5th and Broadway isn’t a four way stop. However, it’s not hard to imagine how you can be in the right on a bike but still seriously injured.

By many people’s definition, this wasn’t really a near death experience. I have pretty good reflexes and good luck — so far. But if the SUV driver didn’t see me, it’s reasonable to assume he wouldn’t have seen a child biking on Broadway on that Sunday morning. Or a cyclist on a faster bike. Or my wife, who was only 20 feet behind me.

Clearly, he knew he was wrong. Instead of slowing down or apologizing, he doubled-down and turned it around, refusing responsibility for his actions. The two bystanders who saw the incident corroborated that he was both wrong…and a jerk.

Three months ago was the beginning of Spring. Now it’s summertime and our streets are filled with joggers, walkers, pets and pedestrians as well as cars. If you are a biker — single up — and remember that cyclists have to share the road, too. If you are a motorist, look both ways and find a safe place to pass the joggers and the bikers with whom you share the road.

Drivers should remember that bikers will frequently give parked cars a wide berth when passing because cyclists never know when someone will open their car door. Be patient. Count to five. Nine times out of ten that’s enough time to find a safe place to pass.

Taking a few extra seconds to slow down and pass safely will probably not make you late. But it might save someone’s life.

The operator of a vehicle overtaking, from behind, a bicycle proceeding on the same side of a roadway shall pass to the left of such bicycle at a safe distance until safely clear thereof. (effective November 1, 2010)