Nyack, July 8 — For the second time in a eight days, the Nyack Brook has overflowed flooding Main Street in Nyack.

A heavy afternoon downpour at about 5p today the turned the street that runs into the Hudson into a river just North of N. Franklin Street.

On June 30, a similar summer storm damaged businesses on Main Street and flooded the interior of the Riverspace Arts theater.

In this :20 video, you can see the Nyack Brook flowing over the hood of the BMW parked in the lot just to the left of the Amazon Cafe. The car was successfully started and driven away by its owner shortly after this video was shot.

Environmental activist and Nyack resident Candice Robins says the flooding is getting worse because what was once vegetation is now non-permeable concrete. “The development along Nyack Brook — specifically the new construction up on on Main Street — is causing Nyack Brook to overflow,” she says. “With the exception of Hurricane Floyd in September 1999, this kind of flooding never happened before.” 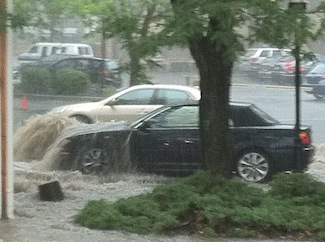 Removing the forest and natural vegetation in Oak Hill Cemetery and new building on 9W is taking a toll on Main Street and the basements of shops on Main Street because more water coming is coming down Catherine Street than Nyack Brook can handle, says Robins. Nyack’s Building Inspector issued a stop work order to the cemetery last August to halt further clear cutting of 19 trees that were supposed to have been preserved.

Robins adds that its a problem bigger than flooded streets and wet basements. “Stormwater pollution is more than just motor oil. It can also contain mercury, arsenic, lead, cadmium, nickel, herbicides, pesticides.” Everything the water touches along the way and gets picked up and dropped unfiltered into our basements and the Hudson, she says.