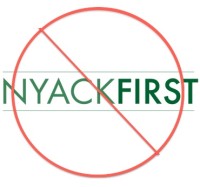 Nyack, July 14 — When Jen Laird-White and Doug Foster ran for Village Board in 2007, they formed “Nyack First,” a multi-candidate committee they registered with the NY State Board of Elections.

Although Foster and Laird-White raised funds, constructed a Website and campaigned as Nyack First in 2009, they learned this week that someone else has reserved that name with the Rockland County Board of Elections: Nyack Mayor Richard Kavesh, whom Laird-White is running against in the Democratic Primary for mayor in September.

“It’s terribly disappointing,” said Laird-White. “It’s political finesses that distracts from the real issues in Nyack.” Laird-White says she and running mate Doug Foster have put a lot of time and effort into building Nyack First as a brand and developing a platform that focuses on productive change in the village. “This shows that for some people political strategy takes precedent over helping the community.”

Although he reserved the name with Rockland County, Kavesh says he has no intention of using Nyack First in his campaign. “When the Board of Elections informed me that I could run under only one independent party name, I registered Preserve Nyack, which was the name reform-minded Democrats such as me ran under in 1996 and in subsequent elections,” he said.

So why did Kavesh co-opt his competitors’ name? “The process of choosing independent party names is no mystery, it’s just part of the routine mechanics of running a campaign,” said Kavesh. “Jen and Doug ought to know that nothing I did prevents them from running on the Nyack First line, so I’m not sure what the fuss is all about.”

Which is where this he-said, she-said, she-who-Nyack-Firsts may not be he-who-gets-Nyacks-last story starts to get interesting.

Long time political observers say this may be unfair and unprecedented — but it isn’t against the rules. “Richard is a political savant. Jen is a political innocent,” says John Shields, Kavesh’s predecessor as Mayor of Nyack. “She was under the impression registration could wait until she filed her petitions — and that was incorrect,” he said. Shields says Kavesh’s pre-emptive strike to register his competitors’ party name is simply political one-up-manship. “In politics nothing nefarious is unprecedented,” said Shields. “In the long run it may work against Kavesh because this maneuver smacks of politics as usual as opposed to running on the real issues.”

On Wednesday, it sounded like both sides had reached a compromise when Kavesh said he was willing to give up his dibs on Nyack First. “I am not seeking and will not seek any signatures on any petition for the Nyack First Party,” said Kavesh. Village Board Member Doug Foster says he spoke with Kavesh and the mayor promised to give up all rights to the Nyack First name. “The mayor called and said he would even write a letter to the Board of Elections relinquishing the other lines,” said Foster.

But when questioned about the conversation with Foster, Kavesh wouldn’t commit to putting it in writing. “I’m the Mayor of Nyack,” he said. “I’m too busy dealing with floods and other issues in Village Hall and don’t have time for this.”

Kavesh says that even if he were to run on the Nyack First line, he’s sure that Foster and White would win a challenge. But White says she isn’t willing to take that chance. Foster and White have decided to abandon the party line they created in 2009. Shields says it’s the right thing to do. “They should give up the name,” he says. “It’s tainted.”

“When politicians behave badly it hurts everyone,” says one Nyack political veteran. “It’s heinous. What Kavesh did will cause a lot of extra work for his competitors — and he knows that,” says a former candidate for public office in Nyack. “At a time when the village needs more people to get involved, this sends the wrong message. Why would anyone want to run for office if this is how you are treated?” In the heat of an election campaign, candidates sometimes get tunnel vision and believe that winning is the only thing that matters. “I wish that all candidates would take off those blinders and see things the way the voters do. People would like to be more involved — but not if this is what’s going to happen when they do.”

Shields agrees that it’s time to stop playing politics and start talking Nyack. “Too frequently during an election, people don’t stick to the issues,” says Nyack’s former mayor. He issued a challenge to both candidates as a way of getting the campaign back on track. “Jen and Richard, when are you going to have a public forum? It’s time to talk about the issues instead of playing political games,” he said.