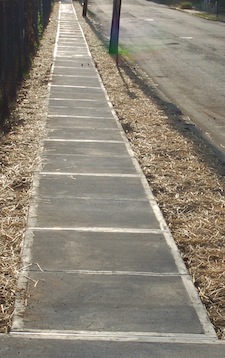 The new sidewalks have come to Nyack.

They’re very nice, these new sidewalks. Very clean, pleasing to the eye, but in the end, they are but a path. The question is, to where does this path lead? Does it lead to overpriced rents resulting in too many vacant stores? Does it lead to a town that is widely ridiculed as being one of the worst parking traps on the east coast? (One third of Nyack’s revenue comes from parking and ticketing ‘€“ in 2009, that was $700,000 NET. Roughly half that money is from meter income, and half from tickets.)

Or does it lead to a town that is taxed more heavily than most, yet seems to have little to show for it?

The new sidewalks will not lead you down to the river, which is (pardon the pun) a hugely wasted revenue stream. Nyack’s waterfront used to be home to the Nyack Rowing Association Boat Club, a majestic structure that stretched out into the river. Later, the Lighthouse Yacht Club occupied space at the waters edge. Now, it’s private. The Nyack Boat Club (private club ‘€“ members only) owns a big chunk, the Clermont (who’s piers are supposed to be public, but aren’t always’€¦aren’t really’€¦.aren’t when they don’t want them to be and they post security) took another chunk’€¦what serves as Open to the Public Space is a craggly mess of railroad rock, broken concrete and one warped, tired pier that points sadly to a rotting barge, knowing it will one day share that same fate. What was once a port, a destination, is now a private address for a privileged few. 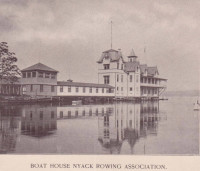 Nyack also used to have hotels. Not just the Best Western up on 59 (did you know that in decades past, adult movies were filmed at the then named ‘€œWest Gate Motel’€? Little bit of history for you.) No, Nyack used to have honest to goodness lodging. The Hotel St. George is probably the most notable, but at one time, there were over 25 hotels and inns in the downtown Nyack area. Now, the mere mention of lodging in the village sends people into near fits. Over a decade ago, when a couple wanted to convert the old Stevenson Funeral Home in Piermont into a bed and breakfast, there was uproar. Words like ‘€œtransients’€ and ‘€œflophouse’€ came into the discussion, which are fairly ludicrous terms when one is discussing what one would imagine to be a fairly upscale B&B.

To this day though, the Nyacks have actively shunned the idea of hotels, motels, inns, attractions ‘€“ anything resembling the hospitality industry. In a word, Nyack is decidedly inhospitable.

Look around you, Nyack. You are a tourist town without tourism. Locals don’t buy Tchotchke – the out of towners come for your goods. Or they would, if they had a place to stay. On our way to the fireworks this past Fourth, we passed a wedding party. The bride was stunning, the groom dashing, throngs of guests teemed around them’€¦and you know that, when the party was over, the all went to their rooms ‘€“ at the Pearl River Hilton. Another lost opportunity.

Nyack could once again be a true destination, but she must first open her arms and use her head. Saving the crumbling, condemned ex-crack house built by John Greene is a fools errand (this from one who worked on the restoration of the Tappan Zee Playhouse ‘€“ remember that? I know whereof I speak). Instead, build a museum on that site. Showcase John Greene, Edward Hopper, the Underground Railroad, and Helen Hayes ‘€“ focus on Nyacks history of boat building’€”sloops and steamboats, pleasure craft and submarine chasers – display Nyack’s rich and diverse history in a real, lasting way, or the only history we will leave future generations will be empty stores’€¦and a nice sidewalk to view them from.