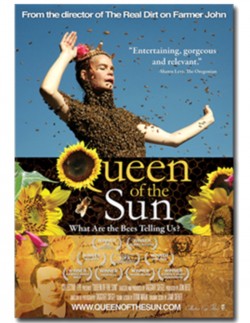 “QUEEN OF THE SUN: What Are the Bees Telling Us?” a documentary about the catastrophic disappearance of bees and the global bee crisis, will be screened at the Fellowship of Reconciliation (FOR), 521 No. Broadway in Upper Nyack on the Sunday, July 17 at 2p.

Colony Collapse Disorder (CCD) wiped out an estimated one-third of the U.S. honeybee population and scientists are scrambling to find out why.  Bayer is funding scientists’ research on viruses and fungus as they relate to CCD. But the the multi-billion dollar pharmaceutical company is not researching the impact of neonicotinoids, a class of pesticides manufactured by Bayer that many suspect is confusing bees and making them more susceptible to disease.

A CNN/Money article in October 2010 explained how important info was omitted from a front-page New York Times piece earlier that month about breakthrough research on finding the causes of CCD.

Earlier this year a leaked document from the U.S. Environmental Protection agency suggested that the EPA  knew neonicotinoids were toxic to bees but allowed them to be produced and distributed anyway.  How’s that for “protection?”   The EPA’s advice to growers?  “Read the labels.”

Somehow, the idea of putting the planet’s growing systems at risk, so that Bayer can continue to do business irresponsibly is especially disturbing.  It’s not like the earth can choose to take a drug only after reading the studies and weighing the various risks and side effects.  We are currently experiencing a side effect that could have serious consequences on our farms and in our forests. It would be nice to see this conflict of interest exposed further in the mainstream media, and the use of this pesticide curtailed, as it has been in several European countries, until more facts are known.

There’s a “buzz” about QUEEN OF THE SUN: What Are the Bees Telling Us? I’m looking forward to learning more on Sunday, July 17 at 2p, when this documentary will be shown at Fellowship of Reconciliation, 521 North Broadway, Nyack, NY.