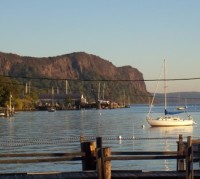 Nyack, July 22 — With temperatures expected to reach 99 today and 100 tomorrow, going for a summer time swim is a great way to cool down. But health officials in Rockland County and NYC warn that you shouldn’t swim in the Hudson until further notice because of sewage that is being discharged into the river from a treatment facility on the West side of Manhattan.

Although the source of the sewage is down river from Nyack, there is concern that currents and tides can spread untreated waste up river as well.

A fire at the North River Wastewater Treatment Plant in New York at W. 135th Street and 12th Avenue yesterday disabled operations at the facility. Untreated wastewater is currently being  discharged directly into the Hudson auntil repairs can be made and service can be restored. The North River plant treats about 120 million gallons of wastewater a day.

In this article:Health, Rockland County