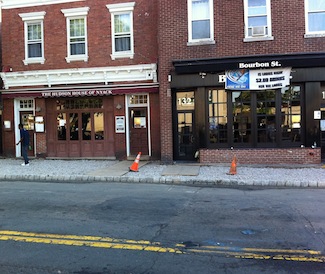 This headline, riffing on James Carville’s mantra during Bill Clinton’s 1992 presidential campaign, wasn’t intended to imply that anyone who talks about parking is stupid. Or that it’s a stupid issue. But often, it seems to be the ONLY thing we talk about in Nyack. Here’s the latest installments in Nyack’s on going conversation about parking.

Comment on New Sidewalks: A Stranger’s Perspective posted by Picadisc:  As a resident and former shop owner in Nyack I am personally appalled and saddened by what this administration has done to the parking situation in our town! I have never seen so many striped out and excluded parking spots, no parking here to corner signs, parking spaces designated for police, cabs and even motorcycles to the exclusion of residents and shoppers, and now to add insult to injury, a new sidewalk design that actually eliminates even more parking spots all across Main Street! What were they thinking To remove the entrance to the town parking lot from Main Street now forces every car directly into the center of town and there they find NO SIGN directing them to aa alternate enterence! I have heard from many residents who, like myself have stopped shopping in town out of frustration with the parking situation!

You are killing this town!

Response from carlopellegrini: Picadisc: Your comments are the exact words I spoke to Jim Politi, our Village Administrator, just yesterday on behalf of merchants on Main Street. He assured me that under his guidance, he will be posting very large Parking signs at every possible obvious place to direct visitors, shoppers, regulars and residents to available parking. I, too, was appalled when, in the middle of running the Farmers’ Market the day of the flash flood, I noticed there were no driveways on Main Street leading into the Municipal Lot. Jim told me yesterday that the intent is to calm traffic (which means it may get the taxi drivers to slow down and the drunk kids at night to not have chance to slip out of town), and create a greater safety margin for pedestrians as they walk in town.

Yes, there is a loss of a number of parking spaces. The sacrifice was to put in new trees, new lighting, new benches and a new look. Yes, it is counterintuitive to those of us who advocate for MORE parking and BETTER parking. But, after making a study of 15 cities around the United States similar in population density and downtown structure as our Nyack, I found that we, as a village, are ahead of the curve. On average, these other cities charge more for their metered parking than we do, but something that the other villages do that we don’t is give a 15 minute grace period on the parking ticket slip (our Parking Meter guys are all over your car after 5 minutes).

But the problem is bigger than anyone can imagine regarding people who try to park in Nyack.

You, the merchant, are not going to be able to ONE DARN THING about the psychology of a shopper in downtown Nyack. I have spoke to Village Administrators and Mayors across the country’€¦they all say the same thing, and research bears it out: when a shopper comes to a small village or town, they want to park IN FRONT OF THE STORE THEY WANT TO SHOP or EAT AT’€¦they will drive around town two times waiting for that parking space to open up’€¦and they are mostly frustrated because it won’t open up within the timeframe they have in their own head about what is ‘€˜reasonably convenient for THEM and EXPECTED by them”€¦which has absolutely nothing to do with REALITY. Picadisc, my own mother over 50 years ago in a small downtown the size of Nyack, used to drive around Main Street and circle incessantly until she found THE PARKING SPACE that SHE wanted. It drove me nuts.

The psychology of the shopper at The Mall is different: they will still drive around two times looking for the space closest to the entrance to The Mall, but they are going to be in The Mall an average of 90 minutes and will visit 3.4 stores during their visit. The average shopper to a Nyack-like village will only visit 1.2 stores, WHICH IS EXACTLY WHY they want to park in front of the store they are going to shop at. Tourists don’t care where they park because they are going to meander through the village. They just don’t want to walk up or down a hill.

So, my dear Picadisc, as a famous comedian once said: ‘€œYou can’t fix stupid.’€ You may believe that it is stupid to take away parking in exchange for a better look and feel to downtown, but you can’t fix the psychology of the shopper. The only option is to get rid of all the sidewalks in Nyack and make visitors park on a diagonal’€¦but, if you have taken out a tape measure lately to measure the distance across Main Street, the cars just won’t fit.

For me, as a Chamber Board member for the past four years, the only option is an off-premise (meaning off-Main Street) parking garage operated as a self-park facility. I travel all over the US for my primary business as a keynote speaker. The best option I have ever seen is the way Bethlehem, PA handled their off-Main Street parking garage. Just beautiful’€¦except for the signage, no one knows it is there.

if you want to do something positive to help advocate for better parking, join our Chamber Committee on Parking. You can contact me at carlo@nyackchamber.org

Sunday Streetscape Update: Nyack Village Trustee Steve Knowlton says the project is actually ahead of schedule, but a last minute required change suggested by one of Main Street business is why the sidewalk on the North side of Main Street at Franklin is currently impassable. “On Friday, we needed to make an on the spot change in the design of the planter in front of Hudson House,” says Knowltown. “We pulled together our engineer, Village Administrator, designer and two trustees—one on-site and coordinated with the contractor to arrive at a solution that met everyone’s needs.” Despite last month’s flooding on Main Street, Knowlton says Nyack’s Streetscape initiative is running ahead of schedule, minimizing the impact on downtown businesses.