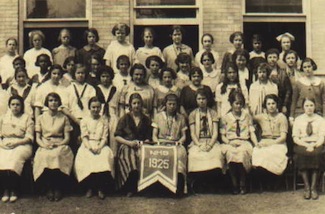 I asked a number of people to guess when ‘€œTake Our Daughters To Work Day’€ began.  Most assumed sometime in the ’70s or ’80s, and many were completely unsure.  However, the roots go back another 70 years, and not surprisingly the first incarnation of this type of program occurred right here in Nyack.

Historically, women have frequently had an easier time of it in Nyack than in many other places; able to achieve advances here earlier than in many other parts of the country.  I’ve written about some of Nyack’s important female figures like Suffragette Caroline Lexow, African-American Millionairess Cynthia Hesdra, Actress Helen Hayes, Author Carson McCullers, and Countess Alexandra Tolstoy – but the Nyacks were also home to a mid-1800’€²s female postmistress, one of the US’s first female physicians, and its first female Supreme Court clerk and of course the first female plastic surgeon ‘€“ the beloved Dr. Martha MacGuffie who practiced for years at Nyack Hospital.  So perhaps it should come as no surprise that the first push for expanding the role of women in the workplace would arise here.

The year was 1925, the ‘€œWar to End All Wars’€ was seven years past, women gained the vote five years prior, and despite the mistaken idea that passing a constitutional amendment to outlaw alcohol sales would discourage alcoholism, the economy was soaring and the country’s mood was hopeful.  Having the formidable Ms. Lexow as a local resident may have helped spur them on, but whatever the reason, the female members of the Nyack High School class of 1925 decided the time was right.  There was a nationwide tradition called ‘€œBoys Week’€ where older High School boys were given a week where they would accompany adults around businesses, municipal offices and the like and then actually run them on the last day.  The young women of Nyack High’s senior class demanded equal time.  Their voices were loud enough to obtain national attention!

The New York Times of June 3, 1925 noted that the week began the day before, and blared the headline: ‘€œGIRLS RULE NYACK!’€  The Times would go on to state: ‘€œ’€¦ the first ‘girls week’ ever instituted in the United States began today with the students of Nyack High School taking over the management of several banks, trust companies, the Nyack Hospital, public library and other institutions. In addition, the large estate of  Mrs. B. Adriance was turned over to the girls, who superintended its’ management for one day.’€

Though the headline was a bit overly dramatic, and frankly a bit dismissive, this still was a remarkable achievement for Nyack’s young women. One can only wonder what their male counterparts were thinking as their ‘€œBoys Week’€ that year certainly did not make the New York Times!  In a sign of the time period however, the Times does smugly reassure readers that unlike ‘€œBoys Week,’€ the ‘€œGirls’€ were limited to non-political jobs even though it was customary to ‘€œentrust the lads with the administration of cities’€ during their week.  I wonder if the journalist covering the event lived to see Terry Hekker elected first female Mayor of Nyack, followed by Nancy Blaker-Weber or Upper Nyack’s Felicia Deyrup and South Nyack’s Patricia DuBow, for it seems that Nyackers are quite willing to entrust the ‘€œgirls’€ with the administration of our villages!

Advertisement. Scroll to continue reading.
In this article:Nyack History