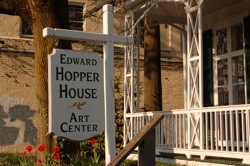 Nyack’s “Year of Edward Hopper” celebration was recognized twice this week by the New York Times. On Wed, Francis X. Cline penned Shadowing the Reclusive Painter of Light followed by  an Arts/Westchester article Celebrating Hopper, A Favorite Son on Friday.

Nyack is proud to get the recognition — and certainly the members of the Hopper House Art Center are happy for the publicity as they celebrate their 40th anniversary. But the articles raise two questions: