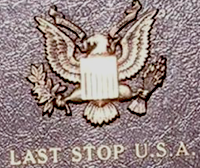 PIERMONT, N.Y. — In the 67 years since the allied landings at Normandy and other French beaches began in earnest the push to Germany,  suburbia has replaced what was the staging ground for the end of the Second World War in Europe. It was in Piermont that Army personnel and their massive equipment lined up to board Hudson River boats that would bring them to New York City and overseas carriers. And it was in nearby Orangeburg that 1.3 million Army personnel were processed through the largest East Coast port of embarkation. Indeed, the order of battle for D-Day began at Shanks as units were assembled in logistics and support.

June 6, D-Day, is a day of remembrance. Anyone with a smattering of that history who walks in this village, this ‘€œLast Stop USA,’€  just less than 20 miles from Gotham, cannot fail to touch the spirits of the good people who marched by in 1943, ’44 and ’45.

Some years back, in a Memorial Day speech I gave in Piermont, dedicating the life-sized, bronze statue of G.I. Joe that watches over the soldiers’ route, I tried to put stories to the men:

They are the spirits who once moved as humanity through this Piermont, past this spot where the inanimate but full-of-life G.I. Joe statue gives constant nod to their service, their courage, their sacrifice, their protection of one another.

This scene of continual reverence plays not just in Piermont but every day of the year, in every year, in every small and big town in these United States. Not one community has been left untouched in the world wars, by the Korean and Vietnam wars, and now by Iraq and Afghanistan.

Wars are fought by the then living and endured for decades afterward by the survivors. The memorials we erect to those gone are in worthy and humble tribute and comfort the living, but it cannot end there. What Abraham Lincoln said at Gettysburg must be remembered, must be repeated:  ‘€œIt is for us the living, rather, to be dedicated here to the unfinished work which they who fought here have thus far so nobly advanced.’€

Many good people, many ordinary ones made so extraordinary in calamity’s forging, marched in Piermont on the way to war. Not all returned, and those who did had to live the lives of their buddies, too, fulfilling the promises of a safe and secure democracy, so that, as Lincoln added, ‘€œ… this nation, under God, shall have a new birth of freedom ‘€” and that government of the people, by the people, for the people, shall not perish from the earth.’€

You hear such voice still, here in Piermont, from the one-million-plus spirits who passed through to the European Theatre of War. They will never stop speaking, in this village and in all of this America.
We must listen.