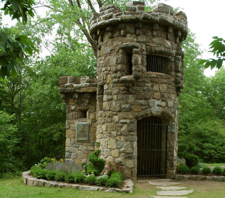 This Sunday, let mom have her day with Mother Nature. The Palisades Interstate Park Commission hosts a special Mother’s Day Hike on Sunday, May 8 at 11a.

The guided ‘€œMothers Day Hike to the Women’s Monument’€ starts at at PIPC Headquarters in Alpine (Palisades Interstate Parkway Exit 2) and covers about four miles in two hours over easy terrain.

The Women’s Federation Monument,  dedicated on April 30, 1929, is cliff-top monument which commemorates the role the New Jersey State Federation of Women’s Clubs played in preserving the Palisades. It has a rich history of its own, according to NJPalisades.org:

The ‘€œcastle’€ was a monument built in 1929 to honor the role the New Jersey State Federation of Women’s Clubs played in preserving the Palisades. Its design was meant to evoke the ancient watchtowers along the River Rhine in Europe: poets had called the Hudson ‘€œthe Rhine of the New World’€ or ‘€œAmerica’s Rhine’€ because of its scenic beauty. (Its beauty was so revered that a group of prominent American landscape artists in the nineteenth century went by the name ‘€œHudson River School,’€ even though their paintings were sometimes of scenes far beyond the Hudson Valley.)

By the 1890s, several big quarries had begun blasting the Hudson’s famous Palisades Cliffs for gravel for roadbeds and for broken stone for concrete. Many people who lived across the river in New York or who traveled on the river by steamship, or along its banks by train, felt outrage at the destruction these quarries were causing. Newspapers labeled the quarrymen ‘€œvandals.’€ A group calling itself the American Scenic and Historic Preservation Society studied the problem, to see if they could find a way to stop the quarries; some lawmakers suggested turning the Palisades into a military reservation, just to preserve them from the quarries’€”but the army wasn’t interested.

The blasting went on.

The Palisades quarries were big business. They employed hundreds of men. At Carpenter Brothers’ Quarry in Fort Lee alone, it was claimed, 12,000 cubic yards of rock were blown down daily. They shipped the stone as far as New Orleans, for a dollar a ton. For the men who owned the quarries, the fact that the prehistoric stone columns of the Palisades could be blasted down and broken and loaded onto barges’€”with no need for costly overland transportation’€”spelled big profits. No way would they close down their operations without a political fight.

It was the women of New Jersey, a generation before suffrage, who gave them that fight.

In 1900, Governor Foster Vorhees of New Jersey joined with Governor Theodore Roosevelt of New York to sign legislation passed in each state to form an Interstate Commission empowered to acquire and manage the Palisades lands. Money and support from powerful figures, including J. P. Morgan, enabled the Commission to buy out the quarries.

And so a unique Interstate Park had been created. Early on, the Commission acquired a piece of land on top of the cliffs at Alpine that they named ‘€œFederation Park,’€ where they planned to place a monument for the Women’s Clubs, with soaring views across the famous Hudson so far below’€¦

The little ‘€œcastle’€ on the Palisades, now part of New Jersey’s Women’s Heritage Trail, marks one stop along the long journey that led to that day in 1920’€”when the right to vote was extended to more Americans than on any other day in our nation’s history.