Nyack, May 9 — Three special events brought crowds from around the villages and across the world to Nyack last weekend. 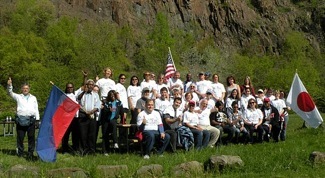