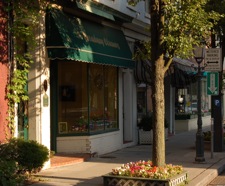 New York City is great, but Nyack is nothing to sneeze at. Just because you’re 35 miles from midtown Manhattan it doesn’t mean you can’t have fun. In fact, once you’ve visited, or moved here (and there is a direct correlation) you might even start to feel sorry for all those stressed-out, nature-starved, over-taxed New Yorkers. For the record, I loved living in Manhattan, but here’s a few reasons why I’m glad to now be in Nyack instead:

A parking space can usually be found in Nyack near your destination and you can steer your car into it without fighting off 45 other harried drivers aiming for the same one. Sure, you have to pay for the spaces here, too, but at least, once you’re parked, you can stay for more than seven minutes and the parking rules and regulations don’t require a PhD in Semantics to decipher.

When someone tells you to ‘€œgo take a hike,’€ you can easily take him up on his suggestion, and even invite him along. (Hook Mountain anyone?)

If you are on the market for a new party shirt, you needn’t traipse around to every boutique in a 70 block radius, each of which has only one overpriced shirt on display. You can check out the beautiful new Maria Luisa or Perennial Consignment in town or’€¦ (for shame!) you can even pull into the Palisades Center Mall to hit several stores in one shot, thereby increasing your chances of looking snazzy. City dwellers speak the m’€” word with extreme disdain while, in fact, New York City is quickly becoming one big mall itself (Walmart is on its way) and they’re just jealous that our mall (however gigantic) is all contained in one place.

The winged creatures here are more sophisticated and diverse than all those rangy pigeons. For example, local cardinals and blue jays have enough self-respect to get dressed up before they head out for the day. And instead of ravaging moldy pizza crusts that even rats would pass up, they dine on dainty seeds at quaint restaurants in the sky.

On weekends, you can admire the colorful pelotons of cyclists on local roadways, instead of getting flattened by one as you try to make your way into Central Park. At the Runcible Spoon, where cyclists gather in droves, you can ask them exactly what a peloton is.

Why be overwhelmed by dining possibilities when you can just cut to the chase? You can enjoy an almond croissant at Didier Dumas, a burrito at Harry’s and a slice of Black Bottom Banana Cream Pie at Hudson House in one fell swoop, then chase away the calories with a run along Nyack Beach the next morning. That afternoon, you can refuel with Thai food, Indian food, and/or sushi and’€¦

During a stroll around Rockland Lake, you can see a heron, a turtle and a wild turkey, none of which are behind the bars of a zoo (or the bars of a jail cell after the Halloween parade in the village.)

Finally: you can acquire living space in the Nyack area for literally 75% less than what similar square footage would cost you in New York City. (Of course, there’s really no comparison, when you factor in outdoor space, garages, and actual closets that don’t do double-duty as ovens.) I repeat: 75% less. Even people who work in the creative arts industries can make sense of this math. (And they do.)

Jocelyn Jane Cox is a local freelance writer and figure skating coach who writes TheHomeTome.com, a home and humor blog with a Nyack slant.