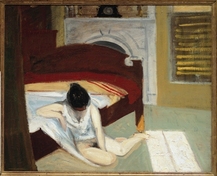 Edward Hopper, Nyack native son and famed painter of realism, whose ‘€œNighthawks’€ and other works articulate American solitude as mood, thought and destiny,  is ‘€œback home’€ where he was born in 1882.

Hopper House, the art center in the family’s 1858 home at 82 North Broadway, is celebrating ‘€œThe Year of Edward Hopper’€ in recognition of four decades of rescue, renovation and use. As part of the celebration, and in the first scholarly effort to connect the painter to his roots and formative years,  Hopper House is trying to awaken Nyack to the incredible Hudson River light that is everywhere. Young Edward, who began drawing at least at age 5, saw that illumination each morning as it shot up Second Avenue into his bedroom. In the afternoon today, you can almost touch the light as it baths the parlor, now the principal gallery.

Hopper House, which has the dual mission of preserving the home as well as advancing all manner of art, hopes visitors and villagers alike will observe as Edward did, taking in what contributed to his many paintings, watercolors, prints and sketches, produced almost to the day he died in 1967. A full listing of ‘€œThe Year of Edward Hopper’€ events, including the current ‘€œPrelude: The Nyack Years,’€ the May 21-July 17 unprecedented showing of his early works, is available at HopperHouse.org.

Wherever you live — in the Nyack area, in the Midwest, in the South, wherever in America — I urge you to ‘€œsee Hopper,’€ as his home community is now doing. His works often include a person in contemplation, say a man sitting on a wooden sidewalk in front of a store (probably his father, a Nyack dry goods merchant) or the ‘€œeffect of sunlight on the wall of a house,’€ geometric patterns that seem to be windows inviting the viewer to interpret, the sort of lighting you see all over Nyack. But you need not be in this village to see his take on American solitude.

You spot the ‘€œsnapshot effect’€ of his art, moments in time that have an obvious history and the future of which might well be guessed. Look about the Nyack of today, at the woman catching a bus at Cedar and Main, at the couple leaning on a porch rail, at an upstairs window framing humanity. Always a story — here in Nyack, and elsewhere, too.

Today Edward Hopper is iconic, his ‘€œNighthawks’€ and other works recognizable worldwide. Recent museum shows in Boston, Washington, New York City and Europe have drawn many thousands in reverent communication with an artist who said so little by speech but who in his paintings expressed deeply and extensively facets native to the American being. Hopper offered as much in this quote: ‘€œIf I could say it in words, there would be no reason to paint. The whole answer is there on the canvas.’€

The artist’s boyhood home is part of that ‘€œcanvas,’€ a source of the light, real and figurative, that was Hopper’s painting harmony. Nyack helped form the vision of an artist who celebrated American solitude and the great quiet, the self-reliance, even the genius within. Now, Edward Hopper has returned home in this local recognition of his gift.

Arthur H. Gunther, a retired Rockland County newspaperman, writes weekly at TheColumnRule.com. He is also a trustee of the Hopper House in Nyack, NY.