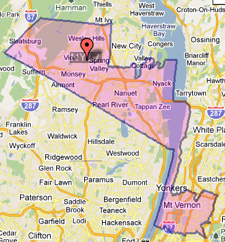 Regardless of whether New York’s congressional redistricting is handled in a civil, bipartisan manner, it appears that the Lower Hudson Valley is due for some big changes in 2012.

Census data released last month, shows that Rockland, Orange, and Dutchess Counties had relatively substantial increases to their populations, while Putnam and Westchester Counties had more modest increases. And with some counties, such as Greene, Columbia, and Ulster showing more stagnant growth and with 17 Upstate and western counties such as Hamilton, Delaware, and Oswego showing population decreases, New Yorkers can expect at least one of its two Congressional seat losses to come from the North. Further, all counties downstate of Lower Hudson Valley have shown at least modest population increases.

So, what does this mean for residents that live in the 17th, 18th, and 19th Congressional Districts? At the very least, they can expect those districts to move northward and westward, taking up the slack from upstate while allowing for some population shifts in New York City, where insiders speculate that districts like the 15th and 16th (currently represented by Congressmen Charles Rangel and Jose Serrano respectively), might dominate the Bronx, perhaps even pushing the 17th district, where Rep. Eliot Engel has his southern front, out of the borough.

Looking over the census data, and understanding the importance of keeping together homogenous and contiguous communities, I’ve postulated what I believe could likely happen during Congressional redistricting. If anything, I think my predictions are conservative compared to others, and they play to the census data, knowledge of the region’s communities, and the base need for both major political parties to fortify their current fiefdoms:

While I am not deluded enough to believe that my estimations should be written in stone, they are reasonable assumptions knowing some of the parameters involved. As a political observer, I am only giving a somewhat educated assessment, much in the same way that a sports columnist will tell you his NCAA college basketball brackets. You can’t expect all the calls to go my way, but it would be an upset if I am to get it totally wrong.

How the district lines will eventually be drawn depends many nuances of demographic science, our State and Federal laws, and the whims and demands of politicians who seek to retain power. And no matter what rules are put into place there are many ways to draw districts. Even with a strict, non-partisan process, there are still dozens of ways to draw the lines that meet the criteria legally and legitimately.

In New York and 35 other states, the legislature is responsible for redistricting, in many cases subject to approval by the state governor. To reduce the role that legislative politics might play, seven states (Arizona, Hawaii, Idaho, New Jersey, California, Minnesota and Washington), carry out congressional redistricting by an independent organization or bipartisan committee. Three states, Iowa, Florida and Maine, give independent organizations authority to propose redistricting plans, but the legislatures reserve the right to approve them.

In addition to equalizing the population of districts and complying with Federal requirements, criteria may include attempting to create compact, contiguous districts, trying to keep political units and communities within a single district, and avoiding the drawing of boundaries for purposes of partisan advantage or incumbent protection.

But in New York, where both chambers of our bicameral legislature are in charge of redistricting, the partisanship of statewide politics often comes into play, and there may be deliberate manipulation of the congressional boundaries for electoral advantage, a process which everyone who’s taken high school civics knows as gerrymandering.

Because we have two chambers controlled by different parties, and those parties will get the final say in redistricting in each chamber, we can expect some wildly different outcomes between the New York State Senate and Assembly redistricting plans.

New Yorkers should brace themselves: This process of redistricting will likely become contentious very soon, and if the two chambers have not resolved their differences in a timely manner, the matter may unfortunately end up being resolved in State or Federal courts later this year.

Cliff Weathers publishes Left Of The Hudson, where this article originally appeared.